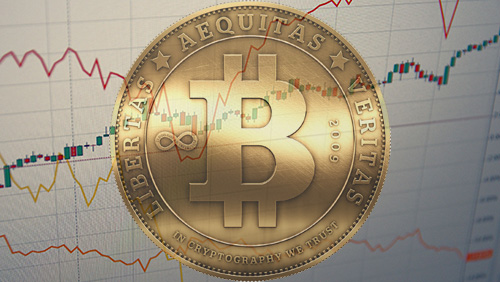 1. Mysterious Long (March, 10) BTC/USD
Before SEC ruling became public knowledge bitcoin surprised us once again by reaching a new all time high and we could all see that mysterious Friday Long. Truth be told that was not exactly a long, it seemed to be a temporary correlation between bitcoin and usd.
If we compare Chart 1 and Chart 2 below, we will see that bitcoin price was going up when USD was going down (from Fri, 10 Mar 2017 12:30:00 GMT till Fri, 10 Mar 2017 13:00:00 GMT). 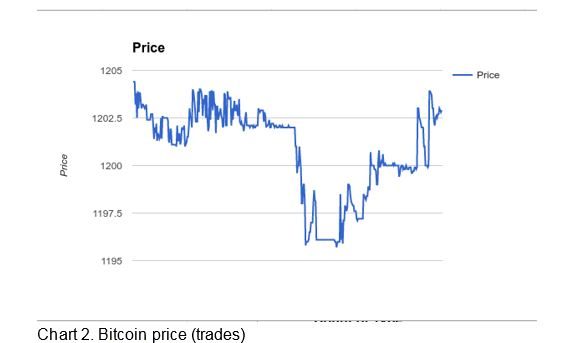 USD started to fall down after a group of rather negative American market reports came out. While waiting for the SEC ruling cryptocurrency world was silent and the only thing that could influence bitcoin price was market reports, that caused USD fall down. Add obvious speculating activity on bitcoin market and you get a new bitcoin all time high.

What experts think about Friday’s Long?

“The largest traders on the market are banks, “the owners of the money”. And the fact that bitcoin has become so popular and expensive is their merit. But of course professional traders are asset managers of that market and they use the same methods. Any experienced trader will say that Friday was the craziest day on the market. And what happened could be explained. With the opening of the American session there was a strong bitcoin growth, which resulted in new historical maximum, and after every historical maximum, there is a drawdown. Market participants understand the maximum is set, and if the market doesn’t go up, it goes down, that’s just how it works. It is nothing but psychology of the crowd, but every crowd has a shepherd, in our case a shepherd is big money and it points the way. Besides, all that was supported by media, and most of the media belongs to the same “the owners of the money”. And it doesn’t matter what the news is. What matters is how market participants reacted.”

“Last Friday, Bitcoin price crashed to the 950 area because of the SEC ETF denial ruling. The optimism got out of control leading up to the day even though it was the obvious answer by the regulators as many of us predicted. This past Friday however it was different, we are still below 1000 and the fear of Bitcoin’s unstable future is only growing. This time it is all about the scaling debate between SegWit and Bitcoin Unlimited. I believe that 915 is very critical support that needs to hold or real panic will set in. I believe that this level will hold and SegWit* will eventually be the scaling solution taking Bitcoin forward.”

After seeing temporary correlation between USD and BTC we couldn’t help but wonder how often bitcoin price could be driven by real economy.

“I believe that financial markets don’t depend on real economy these days. I think it’s actually quite opposite, at times real economy reacts to schizophrenic actions of “the owners of the money”, often with a disastrous outcome. In any case, we live in an amazing time when everything is changing right before our eyes. I think in the next few years there is a strong possibility of  change in the parasitic monetary system, and we will witness a manageable financial crisis.”

Negative decision by SEC was predicted by numerous experts, as we stated in previous digest.

The drastic fall was caused by speculators, who had been waiting for the news to come out and also  high frequency robots, triggered by drastic price change. Judging from the speed of market stabilization, ETF rejection was not the key event for bitcoin market, but it was a chance to profit from an outcome of well-known event.

Probably market should not have reacted that desperate on SEC ruling, of course it is not possible at this point in United States, but there are other countries too. Which country turns out to be the most progressive only time will tell. Chances are we will all be moving to Asia someday soon.

We asked experts about possibility of ETF registration outside US and here’s what they think.

“Options are a very complicated and risky financial derivative to guarantee and back. Even one of the fathers of the Black Scholes Option pricing model ran hedge funds that almost created a global financial disaster in the 1990’s. Anyone who thinks they can bring options to bitcoin and is not a big Wall Street institution with experience is only fooling themselves and their users.**”

Another curious event of the week – simultaneous growth of top altcoins.
We interviewed Roger Ver, investor in Bitcoin startups regarding altcoins current state.

– Roger, do you think altcoins growth was provoked by SEC ruling?

I think the altcoins have gone up substantially because the Bitcoin network is at full capacity. People were waiting and hoping that the ETF would be approved. When it wasn’t, they moved their crypto currency from Bitcoin to coins that aren’t running at 100% capacity like Bitcoin is.

Bitcoin’s fees are higher than ever before,  and confirmation times are now about two hours,  compared to about ten minutes for the first 8 years of Bitcoin’s existence. This creates a horible user experience for Bitcoin users, and motivates them to use things other than Bitcoin.

– How long do you think prices of altcoins will hold up on this level?

I think Altcoins will gain more and more traction until Bitcoin’s scaling issues are solved.

Bitcoin’s scaling problems are all social ones,  not technical.

Bitcoin Unlimited is gaining more and more traction, and this is good for Bitcoin.

– Was this growth speculative?

Yes, but Bitcoin’s initial growth was speculative too.  The initial speculation will turn into real commerce in time as useful infrastructure is built on new platforms.

Another perspective on altcoins we got from Tone Vays.

“Bitcoin’s price is mostly dependent on 3 things. People holding Bitcoin long term, active users of Bitcoin (mostly for illicit transaction) where the user holds the Bitcoin for the least amount of time possible, and speculators/traders. The actual users of Bitcoin continue to increase because there simplify is no alternative, not even close. The long term holders are getting a little nervous and perhaps are not rushing in as fast as a few months ago but I believe this group is still increasing in numbers. This last group of speculators/traders most of whom are inexperienced that are selling and rushing into altcoins. Most of these people will end up losing everything and eventually they try to rush back into Bitcoin at an even faster rate.”

What to look forward this week?
1. Possibility of bitcoin withdrawals resuming at Chinese exchanges
2. Korea Stock Exchange (ETF or no ETF?)
3. Evolvement of Bitcoin Unlimited situation

We want to thank following experts for participation:

Disclaimer: The information of this article should not be regarded as investment/trading advice. Trading remains at your own risk.

Purpose of this digest is to provide readers with reliable information about cryptocurrency trading. We are not trying to chase events report them instantly, we gather information, analyze it and try to discover real patterns of the cryptocurrency rates.

The digest was prepared by allcointraders.com with support of Bitcoin.com.

If you have any comments or suggestions, please feel free to share it with us [email protected]