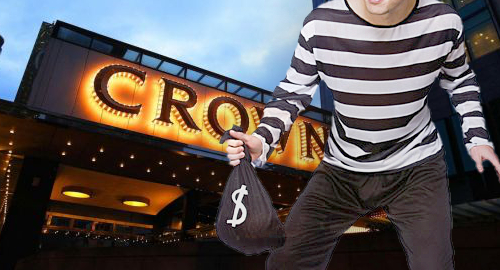 A high-rolling gambler has pled guilty to stealing $125k worth of casino chips from a Crown Resorts VIP room.

Last December, Australian police filed charges against Gunawan Akay, a 38-year-old gold-class member at Crown Melbourne’s Maple Room for high-rollers. The casino operator’s high-quality CCTV footage had fingered Akay as the not-so-nimble-fingered thief who made off with 25 $5k chips two days before Christmas.

On Tuesday, Akay pled guilty to the theft. While Akay’s lawyer is attempting to keep most of the details secret, Crown said Akay was on a prolonged losing streak immediately prior to the theft, having lost thousands of dollars playing high-stakes baccarat.

Akay’s sleight of hand left something to be desired but while the VIP room dealer immediately alerted casino security of the theft, Akay managed to make it to the street without being detained. Being a regular at the casino, Crown officials quickly recognized their longtime customer’s face on the CCTV footage, and Akay was arrested four days after the incident.

To date, none of the chips have been recovered, and Akay is suspected of having dropped some of his ill-gotten gains in his mad dash for the exits. Akay will be back in County Court in July for a plea hearing. In the meantime, he’s been ordered to give Crown properties a wide berth.

PACKER PAYDAYS
Meanwhile, Crown’s largest shareholder James Packer has called in a A$100m loan he made to the company in 2012. Last week, Packer sold a million subordinated notes to Crown for A$101.58 apiece, about 1.5% higher than the original face value of the notes.

That same week, Packer received an additional A$489m from Crown thanks to a 30¢ dividend and an 80¢ payment due from Crown’s sell-off of most of its stake in the Melco Crown Entertainment joint venture.

Packer reduced his Crown stake to below 50% when he sold A$488m worth of HIS shares last August, but Packer has since signaled his intention to take his Crown holdings back above the 50% mark.