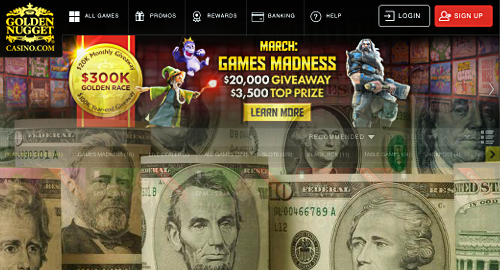 The casino vertical continued to drive the monthly tally, rising 29.8% year-on-year to $16.55m, while poker was up a more modest 8.8% to $2.17m. The casino number was basically flat from January’s total while poker was down about $130k.

The month was won by the Golden Nugget’s casino-only site, which generated $5.175m in February. The total handily outpaces the state’s previous single operator revenue record of $4.79m, which was set by (who else) the Nugget last December. The Nugget has now held the state’s top operator crown for five of the last six months.

The Nugget’s partner sites include the online casino operations of Pennsylvania casino operator SugarHouse as well as that of Betfair US, which announced last week that its New Jersey operations had achieved breakeven status after several years of red ink.

The Borgata family of online gambling sites rebounded from January’s third-place showing, but primarily because of another operator’s downturn. Borgata sites posted combined revenue of $3.745m in February, down slightly from $3.77m in January, with $3.13m from casino and $615k from poker.

January’s second-place finisher, Caesars Interactive Entertainment New Jersey, reported just under $3.5m, down from $4.03m in January. Casino was down nearly 15% to $2.83m while poker declined 6.5% to a devilish $666m.

Fourth-place went to the Tropicana’s casino-only site, which earned $3.25m in February, up from $3.08m in January. That left Resorts Digital Gaming and its partner PokerStars bringing up the rear with $3.05m, down about $110k from January. Resorts’ poker revenue was down roughly 6% to just under $890k.