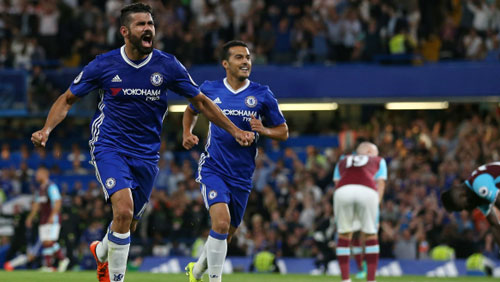 Chelsea’s boss Antonio Conte keeps an unsettled side as the Blues beat West Ham by 2-1 at the Olympic Stadium to move closer to a Premier League triumph.

Chelsea warmed up for their FA Cup quarter-final tie against Man Utd with another London derby victory, this time at the Olympic Stadium.

The Blues are majestic when it comes to taking on their neighbours from the smoke. Last nights, 2-1 win over West Ham was their 118th London derby victory, more than any other London team.

West Ham began the match with optimism in their pre-match cup of teas. Andy Carroll returned to the side after a month out with a dodgy groin, and they were aware the two previous times Chelsea had visited their new stadium they had beaten them on both occasions.

But this is a vastly different team that the one that lost in the English Football League (EFL) Cup earlier in the season. Since that defeat, Chelsea has won 17 games and only suffered a single loss. West Ham was also without the sparkling Michail Antonio who was serving a one-match ban.

By the end of the week, Chelsea’s lead at the top could have been cut down to five points, it still might be seven, but as I type it stands at ten. Eden Hazard broke the duck in the 25th minute after N’Golo Kante stole the ball in midfield, threading it to the Belgian, who finished with aplomb after a one-two with Pedro.

Kante was a beast in the centre of the mark making 77 sprints, more than any other player, and must surely be an android from Japan, released on the world under experimental conditions.

Chelsea, who seemed to be playing with the Hammers like a cat plays with a mouse, sealed things in the 50th minute when the ball ended up in the back of the net off Diego Costa’s thigh from a corner. It was the Spaniard’s 43rd goal in 79 Premier League games for the club, and he now has 17 league goals this season, one behind Romelu Lukaku and two behind Harry Kane.

West Ham scored in the dying seconds of the match when Andre Ayew squared for Manuel Lanzini to slot the ball home, but time ran out before West Ham could prevent Chelsea from taking another huge stride towards the Premier League title. Antonio Conte’s side, impervious at Stamford Bridge, has now lost only once in their last seven away games.