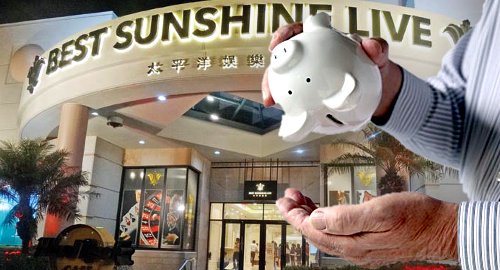 In a filing to the Hong Kong Stock Exchange on Thursday, IPI said VIP turnover at its Best Sunshine Live temporary casino totaled $1.67b in February. The sum is a significant retreat from the record $5.6b the casino reported in January, a period that included the kickoff of the annual Chinese New Year celebrations.

IPI’s monthly turnover reports have reported such dramatic swings in the past, leaping from from $1.55b last August to $3.95b the very next month. But IPI’s latest lowball figure comes shortly after a gaming analyst voiced suspicions that IPI’s figures may be artificially goosed in order to boost the company’s stock price.

The March issue of Forbes Asia contains a lengthy profile of IPI’s operations, including a quote from Newpage Consulting CEO David Green, who wondered if IPI’s monthly numbers “may be confected to ramp up the market value of Imperial Pacific.”

IPI’s deal with the Commonwealth of Northern Mariana Islands requires the company to pay annual fees but it doesn’t pay any tax as a percentage of its gross gaming revenue. As a result, Green suggested that, with “no apparent independent confirmation, it remains conjecture whether the published VIP numbers have any veracity.”

Concerns have also been raised as to how much money IPI has actually collected from the VIP gamblers it welcomes to its temporary casino. The latest figures available show the company’s unpaid player debts accounting for 89% of its VIP revenue through June 30, 2016. Morgan Stanley’s figures for average trade receivables at other Asian casinos is a mere 14%.

While the Commonwealth Casino Commission has approved a few small junket operators doing business with IPI, the company has for the most part chosen to deal directly with its high rollers, meaning there’s few middlemen with which to share the burden of uncollectable VIP gambling debts.

IPI recently sought to extend the lease on its temporary casino in a high-end shopping mall due to expected delays in launching its permanent Saipan resort. The delays are due in part to bad weather and labor shortages but also due to difficulties in raising the necessary capital to fund construction.