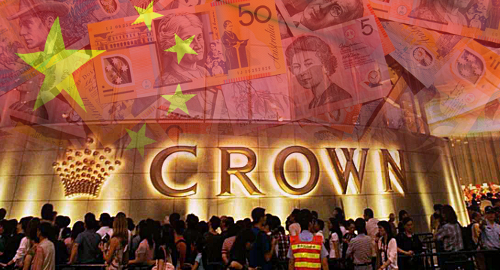 Australian casino operator Crown Resorts saw its VIP gambling turnover fall by nearly half in the first half of its fiscal year following the arrest in China of its VIP marketing team.

Figures released Thursday show normalized revenue – which smooths out the occasionally wild variations in VIP win rate – at Crown’s domestic resorts falling 12.5% to A$1.48b (US $1.14b) in the six months ending December 31, 2016.

Crown’s online betting (CrownBet, Betfair Australasia) and social gaming (DGN Games) operations generated a net loss of A$3m in H1, which sounds lousy until you realize that the division lost A$9m in the same period one year ago. Online revenue was up 40% to A$153.7m but expenses rose 31% to A$156.7m.

MELCO CROWN SELLOFF SCRAPS NEED FOR REIT IPO
Crown’s year-on-year comparisons are complicated by the company’s 2016 decision to drastically reduce its holdings in the Melco Crown Entertainment joint venture, which operates casinos in Macau and Manila. In May, Crown cut its stake from 34.3% to 27.4%, then to 13.4% in December. Crown’s current stake in MCE is just 11.2%.

The MCE selloff contributed A$167m to Crown’s H1 net profit. Absent that windfall, normalized net profit after tax was down 9.1% to A$191.3m. Unfortunately, Crown sold out just as MCE’s fortunes are improving. Crown’s share of MCE’s H1 profits was up 14% to A$42.4m.

Crown says the planned initial public offering of its real estate investment trust (REIT) has been scrapped for the time being. While the company says its MCE selloff has provided the capital Crown had been seeking via the REIT, it’s also possible that the smell of desperation wafting around the Crown brand at the moment is just a little too pungent to realize a good showing on the Aussie exchange.

Crown also announced plans to buy back around $500m worth of its shares, equating to roughly 6% of the issued capital. Crown also plans to buy up to $530m of its subordinated notes listed on the Australian share market.

CRAIGIE OUT
Earlier on Thursday, word surfaced that Crown CEO Rowen Craigie was headed for the exit, the first of what’s been tipped as hundreds of layoffs the company intends to make to improve its bottom line. Craigie, who served as Crown CEO for a full decade, will continue to serve as a consultant on specific projects.

Crown domestic resort chief Barry Felstead had been tipped to assume Craigie’s role but executive chairman John Alexander said Thursday that he would assume the role for the time being when Craigie exits at the end of the month.