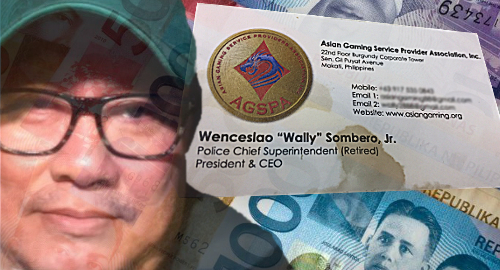 The alleged bagman for gambling operator Jack Lam has returned to the Philippines to face questioning by an inquiry looking into bribery of government officials.

Former Philippine police official Wenceslao ‘Wally’ Sombrero (pictured) returned to the Philippines on Tuesday from Vancouver, where he had fled following allegations that he offered bribes on Lam’s behalf to Philippine Bureau of Immigration (BI) officials and Department of Justice Secretary Vitaliano Aguirre II.

The bribe offers were allegedly made to secure the release of over 1,300 Chinese nationals arrested last November for working at an unauthorized online gambling operation linked to Lam’s Fontana Casino in the Clark Freeport. Sombrero allegedly spoke on behalf of Lam during meetings with Aguirre, as Lam speaks neither English nor Tagalog.

Two days after the workers’ arrests, Sombrero was caught on surveillance video delivering paper bags allegedly containing P50m (US $1m) to two BI officials. Sombrero, who claimed his actions were part of an elaborate sting operation, turned himself in to answer police questions despite expressing concerns that unspecified villains would try to kill him for speaking of the incident.

Sombrero left the country on January 17, despite being subject to an immigration lookout bulletin order. Sombrero subsequently failed to appear at three separate hearings by a Senate committee looking into the scandal, leading the committee to recommend that Sombrero be cited for contempt.

Sombrero’s attorney told the committee that his client was in Vancouver for “medical purposes” and couldn’t return. Committee chair Richard Gordon said he’d received texts from Sombrero insisting that he needed immunity before testifying. Gordon rejected Sombrero’s request, after which Sombrero “didn’t reply anymore,” so Gordon said he was “going to have your passport canceled so you can go home.”

SOMBRERO: ZERO OR HERO?
Sombrero was met by a media scrum upon his arrival in Manila’s international airport on Tuesday. Sombrero revealed that he plans to “invoke my right against self-incrimination” when he appears before the Senate committee on Thursday.

But Sombrero also rejected the suggestion by some senators that Aguirre was connected with the convoluted skullduggery that has defined this scandal. Sombrero said he had “no knowledge or any connection or link that [Aguirre] is involved in the extortion scandal.”

Sombrero later held a press conference at his Quezon City home, where he denied even knowing Lam. The Inquirer quoted Sombrero saying that “if anybody can prove I’m a middleman or I know Jack Lam, I don’t even need a hearing, I’ll go straight to prison.”

Sombrero further claimed that the Senate wouldn’t even be conducting an inquiry were it not for his “heroic act of exposing corruption” by the BI officials. In doing so, Sombrero claimed he was only following the public exhortations of President Rodrigo Duterte, who Sombrero said had urged Filipinos to “tell on, scandalize and shout out against corrupt officials.”

Sombrero then played his martyr card, saying he was “surprised by the media, the cruelty of the netizens” who fingered him as the bad guy in this story. Sombrero said his rough treatment at the hands of the media meant “people like me will no longer come forward, people who willingly face danger.”

SOMBRERO THE REVOLUTIONARY
Sombrero’s claim of not being Lam’s middleman would appear to be one of those newfangled ‘alternative facts,’ as Sombrero had previously described himself as a middleman for ‘gambling lords’ and Philippine politicians. For instance, Sombrero is a known associate of Chavit Singson, former governor of Ilocus Sur province.

It also begs the question why, if he doesn’t know Jack Lam, was Sombrero’s presence required in a meeting with Lam and Aguirre to discuss the arrested Chinese workers.

It turns out Sombrero is the founder of something called the Asian Gaming Service Provider Association (AGSPA), and he claims he was in the meeting not to represent Lam but to represent business processing outsourcing firms that leased facilities at Lam’s Fontana Casino in Clark Freeport.

It’s not entirely clear what the AGSPA does, as its website (Asiangaming.org) is nothing more than a ‘coming soon’ page. Sombrero claims the AGSPA is meant to educate police and the government on combatting illegal gambling by “revolutionizing gambling by cyber-tech solutions.”

SOMBRERO CHARGED
On January 27, the National Bureau of Investigation (NBI) filed charges against Jack Lam under the Anti-Graft and Corrupt Practices Act. Also charged were Al Argosino and Michael Robles, the two former BI officials who accepted the bags of cash from Sombrero, along with their superior, BI intelligence chief Charles Calima, and Sombrero himself.

Senators will have an arsenal of hard questions cocked and loaded when Sombrero makes his committee debut on Thursday, and it remains to be seen how tightly Sombrero will follow his announced strategy of invoking his right against self-incrimination. Regardless, his seat will definitely be a hot one by day’s end.