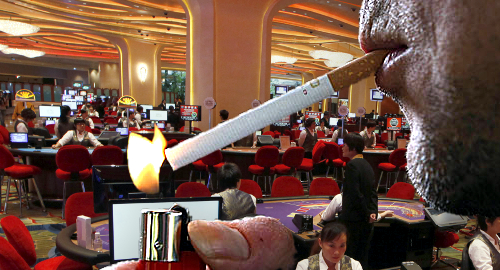 The majority of Macau casino workers support retaining designated smoking lounges on the gaming floor, according to the results of a new industry-funded study.

The study, which was conducted by researchers at the University of Macau, queried over 14,300 casino employees, representing around 13.4% of all casino staff. Of these participants, 73% work in the casinos’ gaming areas, where they are most likely to come into contact with customers’ smoking.

Study participants were asked which one of three options they preferred: the option of a full smoking ban, which the Macau government is currently mulling, earned a 40% score.

Allowing smoking in only the specially ventilated airport-style lounges that casinos have erected on their mass gaming floors was the most popular option at 47%. The status quo, in which smoking is permitted in both the main floor lounges and in VIP gaming areas, was the least-favored option, preferred by only 13% of participants.

The industry cobbled these last two numbers together to conclude that 60% of staff were okay with some smoking in the workplace. However, that number dropped to 55% when dealing with frontline gaming staff, as 45% of them preferred the total smoking ban.

On a more conclusive note, 87% of participants said the air quality in their work environment had improved since October 2014, when the government first banned smoking on the main gaming floor. Hong Kong Polytechnic University Professor Lee Shun Cheng claimed that tests at 33 Macau casino properties had concluded that all the results met Macau’s indoor air quality standards.

At Monday’s press conference announcing the study results, some journalists questioned the independence of the study. Similar shade was thrown at a 2015 study commissioned by Macau junket operators that claimed a full smoking ban would be disastrous for the casino industry as a whole.

University of Macau associate professor Dr. Desmond Lam insisted that the casino operators who funded the study had been “professional” throughout the process and that the study’s results “represents the voices of the respondents. The facts are here.”

Macau’s Health Bureau said it appeared that the study had been conducted in a “neutral” manner and the sample size was sufficiently large that the Bureau would give “cautious consideration” to the results.

SJM Holdings chairman Ambrose So, who was also in attendance at Monday’s press conference, said Macau’s six casino operators believe casino air quality could be further improved via “more advanced specifications and stringent procedures for the smoking lounges.” So hoped that the government would grant operators “a certain grace period” of between 12 and 18 months to upgrade the existing facilities.

Last December, Alexis Tam, Macau’s Secretary for Social Affairs and Culture, did an about-face on the government’s plans to impose a total smoking ban, saying the government was now considering imposing “stricter standards” for smoking lounges, but Tam offered no guidance on whether a VIP smoking ban was still in the works.

A November 2015 study conducted on behalf of the industry by KPMG determined that a full smoking ban would deal such a blow to Macau’s VIP gambling sector that Macau’s overall GDP could decline as much as 16%.