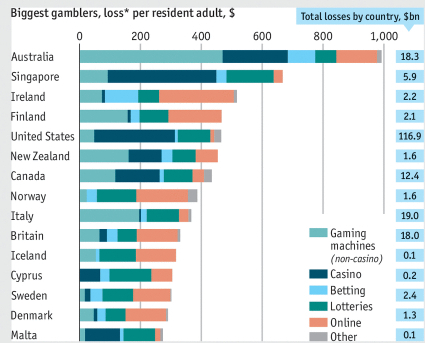 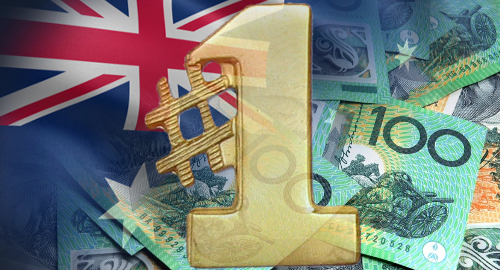 Americans lost the most amount of money gambling in 2016 but Australians retained their crown as the highest per capita gambling losers.

The Economist recently posted the latest year-end estimates by H2 Gambling Capital for gambling spending by both countries and individuals. The US led all countries with just under $117b in gambling losses, defined as stakes minus payouts, excluding expenses. The numbers don’t take into account illegal gambling, such as sports betting outside Nevada.

Runner-up gambling loser China could barely manage half the US total at $62.4b, and that’s counting contributions from Macau and Hong Kong. China had long been tipped to eventually surpass the US until Beijing began its corruption crackdown in 2014, which led to annual gambling losses shrinking in 2015, the first such occurrence since H2 Gambling Capital began compiling the stats in 2003.

Despite its dominance of the country chart, the US managed only fifth-highest in terms of gambling losses per resident adult. Top honors in this category went to perennial winner Australia, where losses hit $990 in 2016. Runner-up Singapore wasn’t even close at around $650, while third-place finisher Ireland was even further back at just over $500.

The bulk of US gambling losses occurred in casinos, while lotteries ranked a distant second and gaming machines outside casinos an even more distant third. By contrast, nearly half of Australian losses came via video poker machines, with casinos a distant second.

THE TIMING SUCKS
Australians spent more money on sports and race betting than on lotteries, and online betting was even more popular than retail wagering. These numbers won’t be welcomed by Aussie online betting operators, who are fighting a Labour party push to ban broadcasters from airing betting adverts during live sports TV and radio programs.

Broadcasters have pushed back against Labour’s proposal, with Free TV CEO Brett Savill noting that free-to-air TV was already the most heavily regulated platform in the country, and the proposed restrictions would “put commercial free to air broadcasters at a competitive disadvantage compared to other media platforms, while failing to achieve the policy intent.”