Home / Poker / AI & Poker: how long before we lift the bans on third-party software? 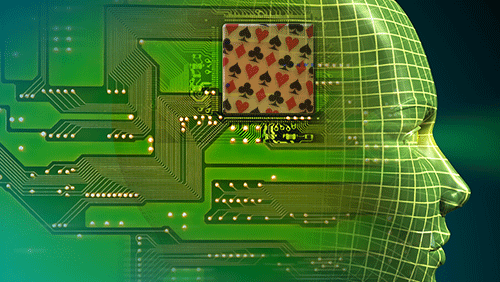 Lee Davy continues to wring as much juice out of the recent artificial intelligence/poker discussion as possible by suggesting that poker rooms may want to allow humans to use third party software in the coming years.

The tree in my garden has bloomed once this year. But this morning, as I stared out of the window deciding whether to believe in God to blame it for the weather, I noticed several new branches emerging from the trunk.

How did I not notice that before?

You try an old pair of jeans, and your top button turns into a frisbee. You compare Facebook posts old and new and notice wrinkles. Artificial intelligence solves our favourite games and then turns us into dust because it was programmed to deal with the migrant crisis, and thought it would be easier to end all life.

When I Grow Up, I Want to be a Futurist


In the age of cost cutting, businesses operating in the poker industry won’t hire a Futurist, but it might be time to get one. Just like I didn’t notice the new limbs in my back yard, one doubts the poker rooms are paying too much attention to Carnegie Mellon University’s Holy Grail moment.

The desire to appease Board Members, smash EBITDA, and earn personal budgets to buy Christmas crap, means instant gratification is loaded into the chamber before anyone pulls the trigger on long-term plans.

But the machines are coming.

Zigging When Everyone is Zagging

Was it Seth Godin who said a great entrepreneur should zig when everyone zags? It’s not a strategy that poker rooms deploy. Poker rooms create products – think Winamax and Expresso – and then competitors steal the idea, calling it something different, like Spin & Go.

Consider the ban of online poker third-party software. It took an age for people to finally zig when the Daddy of the Recreational Poker Model, Jonas Odman was zigging. Today, online poker rooms are doing everything in their power to ban the weapons of mass destruction the pros use to slap crosshairs on recreational players.

But what happens in the future, when AI creators, find a way to incorporate advanced computer vision techniques, so they can get around the Captcha defence and start raping and pillaging online poker lands?

What if AI swarms upon online poker rooms like a plague of biblical locusts? What if the online poker AI defence is no match for a Tom Brady-like AI offence? Is it inconceivable to imagine the world where humans will compete with bots online? Hell, it happens now.

If bots were allowed to surface from the gutters of the online poker ecosystem, wouldn’t we encourage human players to use third-party software to level the playing field?

At a recent AI conference organised by The Future of Life Institute, Elon Musk, acting as a panel member, was asked what scares him about human-level artificial intelligence and the first words out of his mouth were: “We are all cyborgs.”

Online poker players have always used software to gain an edge. Even if online poker rooms ban third party software, players still use a computer program on another platform.

Live poker might have an even bigger problem than online poker. Most third-party software seems to be visible in an online poker room hence the ability to ban. But a dealer, player or tournament director can’t see what is on another person’s mobile phone.

During the World Series of Poker (WSOP) one player had the temerity to pull out a Shove Chart and start figuring out his next move. Jack Effel told him to put it away. I couldn’t see anything wrong with it and have done the same in Blackjack during my ill-advised attempt at trying to beat the game.

AI won’t stop advancing, and if it does, a Walking Dead size zombie apocalypse type of problem has smashed us all in the gonads. Imagine you had a time machine. After you have relived your best sexy moments, you decide to take a pit stop in 1990. Can you imagine explaining the power of the Internet and mobile phone capability? They will give you a zombie-like stare.

Now think 20-years down the line.

What will our phones be able to do?

Let me have a guess.

Our mobile phone will be able to do what Libratus can do except players won’t know you are using it because it will look like you are mindlessly searching through Facebook at photos of the Royal Flush Girls.

It’s only a matter of time.

Be the villain and eliminate mobile phones, iPads, laptops, Rampant Rabbits, and do it today. Hell, you even get the bonus of improving your poker game because people will be forced to talk to one another.

Embrace technology at the table. Be transparent. You could even have Robot Wars style events where AIs compete against AIs in tournaments such as the World Series of Poker (WSOP).

But don’t wait until the problem is staring you in the face.

Go and figure out what?