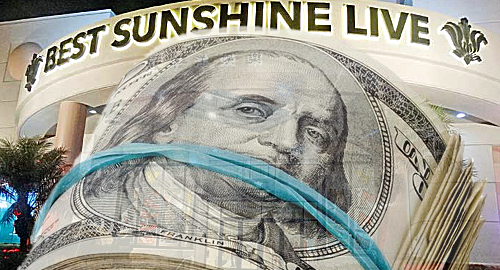 In a filing with the Hong Kong Stock Exchange on Thursday, Imperial Pacific announced that the 16 VIP gaming tables at its temporary casino Best Sunshine Live had generated turnover of $5.59b in January.

The astonishing sum represents a $1.6b improvement over Best Sunshine’s previous record of $3.95b set last September and nearly $4b more than the $1.7b the property generated in November. January’s total represents one-sixth of the total VIP turnover Best Sunshine reported through all of 2016.

While undeniably impressive, the number could prove problematic for Imperial Pacific, what with US financial watchdogs reportedly eyeing the volume of money flowing through the casino and local politicians publicly musing about how the government isn’t getting its fair share of Best Sunshine’s bounty. Then again, the strong showing could help the company find the financing it needs to complete its permanent Saipan property, which is supposed to open sometime this quarter.

So, did Best Sunshine’s strong showing contribute to Macau’s failure to meet analysts’ expectations in January? Macau casinos generated revenue of $2.4b last month, a 3.1% year-on-year rise, but analysts’ consensus had been for an 8.5% gain.

Chinese New Year fell on January 28 this year and the hordes of mainland Chinese tourists descending on Macau for the holiday season have traditionally convinced VIPs to steer clear until the crowds thin.

Union Gaming Securities Asia analyst Grant Govertsen said conversations with Macau junket operators revealed that “many didn’t see any meaningful volumes until January 30. As such, there was little VIP contribution to the January numbers.”

Some analysts are suggesting the VIP numbers will rebound in February, which, if one assumes a zero-sum game in which there’s only so much VIP money up for grabs, could bring Best Sunshine’s February numbers back to earth.

Then again, while Macau’s VIP absence may be following previous patterns, Best Sunshine’s January surge offers further proof that Macau’s once dominant position in the Asian casino market is under threat from other jurisdictions that offer much lower gambling tax rates and can therefore offer VIPs better incentives.