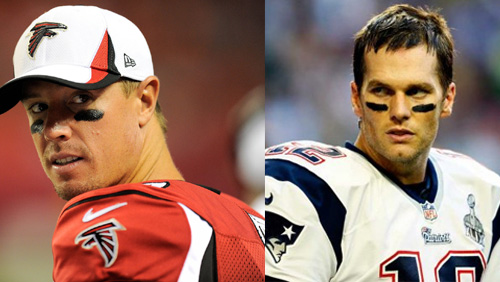 In the first 50 Super Bowls, quarterbacks ended up being named Most Valuable Player of the big game 27 times (54 percent), with running backs and wide receivers tied for second at six a piece (12 percent).

With those numbers obviously heavily weighted toward signal-callers and the two most well-known players in Super Bowl 51 playing that position, it is no surprise to see that Tom Brady of the New England Patriots and Matt Ryan of the Atlanta Falcons are favored to win the award this Sunday in Houston.

Brady has won Super Bowl MVP three times previously in the four title games the Patriots have won, making him the top choice on the betting board at +120 (bet $100 to win $120). He will be attempting to become the first quarterback to win five Super Bowls.

Meanwhile, Ryan is playing in his first Super Bowl for the Falcons and will do so after he is expected to win regular-season MVP honors for the first time on Saturday. Ryan is the +200 second choice to win Super Bowl MVP and would be the first player since Kurt Warner of the St. Louis Rams to win both awards following the 1999 season.

Just about everyone knows about the quarterbacks though, so what are the chances of their teammates being named Super Bowl MVP instead? Two of the last three Super Bowl MVPs have been defensive players, with Von Miller of the Denver Broncos earning the award last year by making regular-season MVP Cam Newton of the Carolina Panthers look mortal.

Atlanta linebacker Vic Beasley led the NFL in sacks during the regular season with 15.5, two more than Miller. However, Beasley has yet to register one in the playoffs and could be a huge factor and a nice sleeper pick at +5000.

Bettors should also not forget about New England cornerback Malcolm Butler after he essentially won Super Bowl XLIX with his game-saving interception of Seattle Seahawks quarterback Russell Wilson in the final minutes.

Butler may have been named MVP had it not been for Brady’s monster performance in leading the Patriots back with 328 yards and four touchdowns, including two in the fourth quarter. Butler is listed as +6600 and could be the difference in keeping Ryan from beating his team.