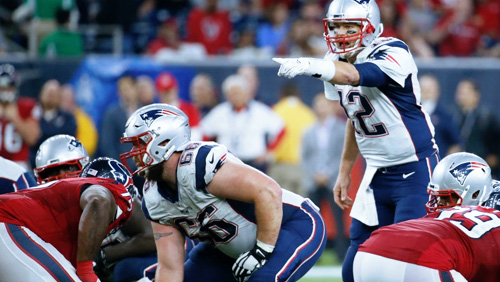 Honestly, I’m a bit shocked. Not that the early Super Bowl LI spread favors the New England Patriots by -3.0 over the Atlanta Falcons. I can’t believe I actually managed to sit through one of the most uninspiring and uneventful championship Sundays I can remember. You think the wild card games were boring? Good lord.

Let’s take a look back before we take step forward. And let me tell you how happy I am that I took the Patriots at +180 to win the Super Bowl when the playoffs started. My only regret? Not believing that Matt Ryan and the Falcons could unleash what they just did.

Dom Capers deserves to be put in a canon and fired back to the unemployment line for that defensive game plan. What a mockery. Running a zone defence against Matt Ryan for an entire game is like trying to fight a bear with yoga poses. It was dumbfounding to watch.

Where was the blitz? Where was the fear? What the hell was Ryan Matthews doing sitting in the flats doing nothing, instead of haunting Matt Ryan? It’s what he does best! Why in the blue hell did Green Bay think they were going to get away with this?

The Packers installed a defensive scheme that was supposed to mitigate disaster, but all it did was allow for it. It was like watching an entire game of watching a team run a prevent defence. I’m just glad Phil Simms wasn’t there to remind us that “Jyyyyyym! The prevent doesn’t prevent yards, it just prevents touchdowns.” God I hate the sound of his voice.

It didn’t help matters that the Packers’ magical offence, which never really got going, failed them in the worst places. There were plenty of drops to go around Green Bay, but the Ripkowski fumble and the initial missed field goal by Mason Crosby were flipped kill switches. I could feel the helplessness bleeding through the television. There was no resolve, not like what we saw when they went toe-to-toe with Dallas.

As for Atlanta, I’m more than happy to sit here and eat crow concerning incumbent MVP Matt Ryan. Do you realize that he’s putting up absolutely historic numbers? You need to understand how mercurial his productions has been before you go rushing to bet the early Super Bowl LI spread. Check this out:

Those two players are 2016 Matt Ryan in the playoffs and 2012 Joe Flacco in the playoffs. Yeah, the same Joe Flacco who had one of the most unreal playoff runs in league history. We never discuss Flacco’s Super Bowl winning streak in reverence because it’s never really replicated itself in any form over the last four seasons, but what he did to put the Ravens in the winner’s circle that year was lethal.

Ryan has not only put up better numbers through two games against decent opponents, he’s smashing the pace that Flacco set. It’s absolutely unbelievable and deserves some well due adoration. Especially by me.

Another little x-factor I noticed whole heartedly about the Falcons on Sunday as they were pistol whipping the Packers is that they exude this quiet arrogance. It’s the same kind of vibe that the Seahawks have. They just believe that they can beat the shit out of anyone. The Falcons are no different.

That confidence has to have come from somewhere and patient zero is undoubtedly head coach Dan Quinn. He’s brought that same grit, tenacity and ferociousness to a team that doesn’t have the type of braggarts that make Seattle so easy to hate. You could see it on Sunday. They just knew they could kill the Packers. You felt it from the first drive onwards. It was intoxicating, quite frankly.

You need that confidence to beat a team like the Patriots, and Quinn has been the missing catalyst for it all. Mike Smith was never going to get this type of performance out of Ryan and the boys. Leadership matters in the NFL. It’s why guys like Carroll, Payton and Tomlin are so well paid. They make their players believe they can do anything.

Beyond everything that Atlanta has done to get here, the overwhelming trend that will force you to back the Falcons on the early Super Bowl LI spread is the simple fact that the underdog has been the overwhelming preference overall. In the past 15 championship games, the dog is 11-4-1 ATS. It’s a ludicrous trend that handicappers like me try to buck more often than not.

You can do a lot worse than betting on one of the best offences in league history, even with a shallow, early Super Bowl LI spread hanging over your head. The Falcons are absolutely worth your money now, unless you just believe in Tom Brady.

That being said, how in the hell did Antonio Brown get stifled so badly? It’s like the whole coaching staff had no idea how to break him out of double or triple coverage. “Oh god! They put TWO DEFENDERS on him?! WHAT DO WE DO?!” It baffles me when stuff like this happens. This is why the football gods invented hook routes and screens isn’t it?

Pittsburgh looked like it gave up when the game was still 17-6 going in to the half. Losing Bell is a big time loss that often feels impossible to recover from, and I’d sympathize more if New England wasn’t without Rob Gronkowski. Next man up. Kudos to DeAngelo Williams for doing his damn best, but shame on Tomlin and Ben Roethlisberger for not figuring out a way to get Antonio Brown the ball more often. Guys, there’s a reason Sammy Coates is open. He sucks.

As mentioned, the favorites don’t fare well in recent renditions of the Super Bowl and the New England Patriots are no strangers to getting upended in the biggest game of the year. The last time Belichik and Brady faced a line like this, they were -2.5 favorites against the New York Giants in the big grudge match. We all remember how that ended (it was awesome).

Skipping historical betting trends for a second, a wager on the Patriots basically requires you to believe that Uncle Bill can draw up a plan that will snuff out the Falcons. And there’s no proof that he can do just that. Well, there sort of isn’t.

I harped on this point last week, but the Patriots haven’t really played anyone good in a long time. The last time they lost was against Seattle back in mid-November (or as NFL people call it “Week 10”). Since then they’ve whooped the Niners, Rams, Jets, Ravens, Broncos, Jets, Dolphins, Texans and now the Bell-less Steelers. It is absolutely fair to say that they are not prepared to face what seems like an unstoppable offence.

The whole thing about betting, however, is that it takes a leap of faith. To be completely honest, the Falcons should probably be the favorites on the early Super Bowl LI spread. I mean it. That offence is just too proven and battle tested compared to the production that New England has generated against lackluster competition.

This is where that whole “Uhhhh…it’s Tom Freaking Brady and Bill Freaking Belichik, dude,” line of thinking enters in.

It’s really, really hard to bet against those two guys, especially when the ultimate middle finger to Roger Goodell hanging in the balance. Is that enough for me to wager on the Patriots as favorites on the early Super Bowl LI spread?

Not yet. I need some time to think about this.

I also need to bet a lot of money on the OVER in the Pro Bowl to recover the money I flushed down the toilet by betting on the Packers and Steelers.