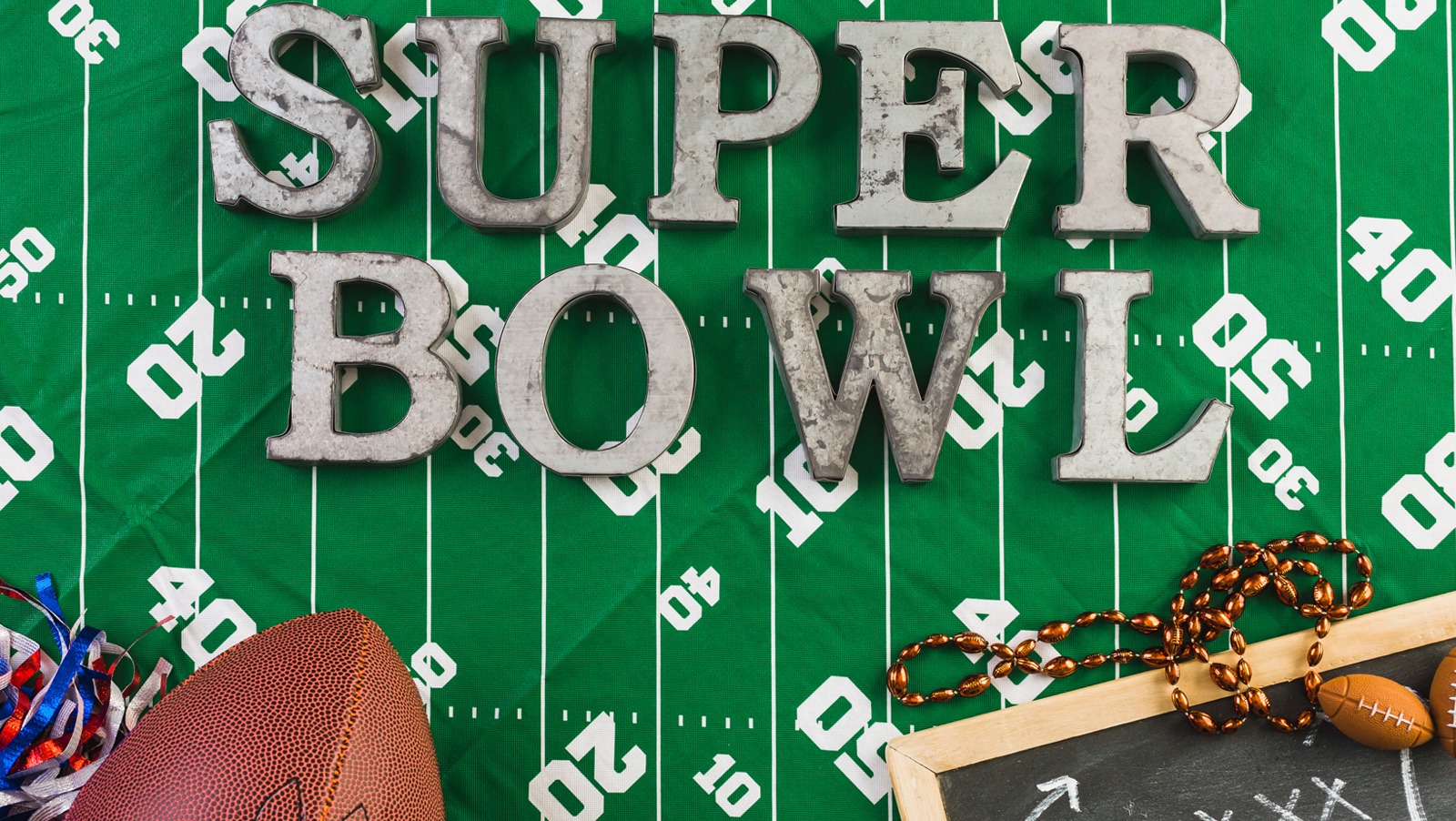 By now you’ve probably heard the news: Las Vegas and the sportsbooks got hit like with a tsunami this past weekend. It didn’t help that the weekend prior didn’t go so well for them either. So how have they reacted with odds to win Super Bowl 51 in the NFL futures? And where are they forecasting the AFC and NFC Championship games?

Now that we’ve trimmed the fat from the NFL playoffs, the odds to win Super Bowl 51 have tightened up. There are no bad bets here. The only quarterback in the bunch that hasn’t won a Super Bowl is Matt Ryan of the Falcons, but he also just strung together an MVP-worthy season that produced one of the greatest offences of all-time.

Atlanta saw the most significant drop in overall value, going from +800 to +260 to win Super Bowl 51. Green Bay decreased from +550 to +375, while Pittsburgh went from +800 to +425. These are all relatively even outcomes by the time we get to the conference championships so I wouldn’t think too much of anything.

However, if you were to generate some hyperbole anywhere, it’s with the Falcons. All of the other three teams remaining in the playoffs are pretty big public bets. Even divisive teams like the Steelers have as many supporters as detractors. Atlanta doesn’t and hasn’t fallen in to that category as a betting magnet despite their offensive output this season.

Let’s put this in perspective: Atlanta started the playoffs as a +1100 long shot to win Super Bowl 51. Now they’re the second favorite behind New England. Sure, that’s a byproduct of the matchups and how the playoffs unfolded, but it’s also a reaction to how well Atlanta has played.

The odds makers and the sportsbooks are coming off of one of the most devastating pair of NFL betting weekends they’ve ever seen. The simple fact that they’ve cornered Atlanta by that many price points means flat out that the books are terrified of them.

So it’s pretty comical that none of the long-term plays that I proposed at the onset of the playoffs actually involved the Falcons. My main standing play remains on New England to win Super Bowl 51, but my hedge for Steelers-Packers at +2000 with an exact series matchup prediction is still the biggest possible payout that I have. Nothing I’ve invested in involves those Dirtiest of Birds.

Now I’m starting to regret it, and if any team has me frightened in the playoffs it’s the Atlanta Falcons. Is now the time to start packing in a slight hedge on them? It could be.

However I’m not pulling the trigger. As I’ve written before, you have to build your NFL futures bets to win Super Bowl 51 with some insulation already factored in. I have that, and if Atlanta spoils the whole damn thing for me then I have to use the actual Super Bowl line to try and recoup any losses I may have suffered along the way. That’s how this works for me.

I’ll say it one more time: there aren’t any bad bets here anymore. Everything is in play. You just have to talk yourself in to the safest proposition for your own terms, and for me that still involves some form of New England, Green Bay or Pittsburgh to win Super Bowl 51.

If you absolutely love Atlanta, there’s nothing wrong with a heavy play on them prior to this weekend’s set of games. I just think the value has come and gone already – if you have them at +1100 or +800, holy hell.

Now, on to the conference championships…

I’m just going to get this out of the way in case there are some Seattle fans still moping about their loss last weekend: the pick off of the deflection created by Luke Wilson that ended the game should have been reviewed. I’m shocked that it wasn’t. The Seattle tight-end most definitely made a football move and I’m not conclusively sure that he wasn’t down by contact before the ball came out. Why the refs didn’t review that play is beyond me and I’m also surprised that Pete Carroll didn’t throw a tantrum about it. End rant. 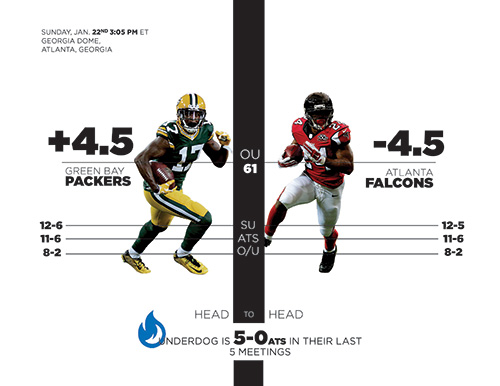 That being said, Atlanta was as sharp as a chef’s knife last weekend. The way that they dismantled Seattle for 36 points was a thing of beauty and all credit goes to Matt Ryan for taking advantage of everything Seattle afforded him. At 5-0 SU and 4-1 ATS in their last 5 games, it’s hard to lean away from Atlanta.

Betting against the favored Falcons, however, is a lot easier after watching Aaron Rodgers eviscerate the Cowboys defence last weekend. He found every possible weakness – including freaking substitutions – and called them out on it. He’s absolutely capable of winning this game by himself regardless of his supporting cast. You can’t possibly tell me that Atlanta has a better defence than Dallas. There’s just no way.

And that supporting cast may, or may not include his two top producers from the 2016 campaign. Jordy Nelson is still nursing fractured ribs, while Davanta Adams joined him on the sidelines last weekend with an ankle injury. Their status remains up in the air. Considering that the Packers looked just fine without Rodgers, and that Adams wasn’t much of a factor last weekend anyways, I’d say it’s a non-starter.

Besides, Green Bay has notched an insane output from Rodgers in the last two months with 34.8 points per game in their last 6 games. By comparison, the Atlanta Falcons have produced 38.0 points per game in their last 5. Neither defence is other worldly, and while Atlanta’s looked good against Seattle last weekend it’s also safe to say that the penny pinching Seahawks paid for the lack of money they put in to their offensive line. Green Bay has one of the best out there.

The Falcons and Packers don’t have defences that can completely shut down either side, and the reason Green Bay isn’t closer on the line has more to do with Nelson and Adams possibly being shelved than anything else.

I am not overly concerned or fixated on any particular facet of this matchup. At this point, I just happen to believe much more in what Aaron Rodgers is doing than Matt Ryan overall. You could easily convince me to go the other way, but that’s the corner I’ve chosen to die on.

Matt Ryan might be ready for this moment, but I know for sure that Aaron Rodgers is. The Packers needed some luck and good fortune to get to this point, and they’ll definitely need some more to get past Atlanta, but they aren’t just blessed by the football gods. They’ve blessed to have the best player in the game on their side.

Obviously the smart thing for me to do personally is bet on Atlanta since I have Green Bay locked in to an exact matchup bet already. But where’s the fun in that. I’m all in at this point.

What I’m betting on here is simply a tight game. I just can’t see a Steelers-Patriots game playing out any other way. Of course, that’s not exactly how these matchups have gone in the recent past. These Pats-Steelers meetings have been all over the map contextually. They haven’t met in the playoffs for over a decade. But the big constant is this: Tom Brady is magnificent when playing the Steelers.

Brady has averaged 286.2 passing yards over 11 meetings with Pittsburgh and notched 26 touchdowns against just 3 picks. That’s amazing. You already knew that Brady is the best (if not “one of the best”) to play the position, but he comes out to party against Pittsburgh.

By comparison, Ben Roethlisberger has played the Patriots on 9 occasions and has put up pretty typical numbers for him as a starter. Roethlisberger has averaged 278.6 yards passing and picked up 19 passing touchdowns to go with 9 interceptions. Most alarming is the fact that he’s given up six of those picks in the last five games against New England.

That doesn’t necessarily mean that you should instantly bet against Pittsburgh. The Steelers have done a great job of taking out big play threats in the playoffs. They shut down Travis Kelce and Tyreke Hill last weekend, so it’s no guarantee that guys like Deion Lewis et al will just “go off” because Brady is commanding them to do so.

Pittsburgh has been bolstered by some incredible play from James Harrison, Lawrence Timmons, Ryan Shazzier and the emerging Bud Dupree. Alex Smith and the Chiefs found out the hard way that playing the Steelers is a grind if their defence shows up, and this might be one of the best defences we’ve seen from Pittsburgh since their peak form under Dick LeBeau.

At this point, there are simply too many weapons for me to ignore when it comes to the Pittsburgh Steelers. Le’Veon Bell is a nightmare for a defence like New England’s. Antonio Brown is a homerun threat, and I can’t say that New England possesses the same caliber of receiving weapon. Obviously Gronkowski would be that guy, but his presence would’ve also shifted this line mightily.

There are good trends, and horrifying ones both ways. Namely, Pittsburgh is just 1-3-2 ATS when playing on the road in the playoffs. I’d say last weekend’s performance against Kansas City evaporated those worries. The Patriots are just 1-6 ATS in their last 7 AFC Championship games. That one’s a bit easier for me to find some traction with.

New England has played like a perfect team all season, but they also haven’t played a real contender in a long time. The last time was in a loss at Gillette…to the Seattle Seahawks. Yes, that was a long time ago but it matters.

Pittsburgh can give the Patriots bigger fits than they’d imagine, and I’m not just saying that because I have a 20/1 bet on Packers-Steelers. I don’t actually think Pittsburgh wins this game. I just think we’re in for one helluva football game, and the Steelers won’t stop bringing the heat until the final whistle blows.

Roethlisberger, despite everything people say about him, can and will keep pace with Tom Brady. I’m not brazen enough to take the moneyline, but I’ll happily secure this AFC championship betting line with that big of a cushion.