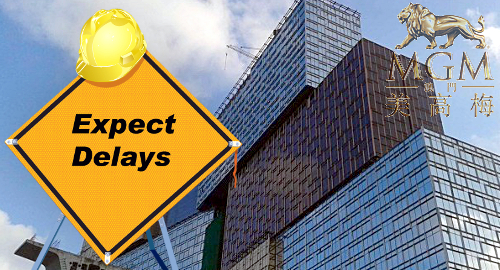 Casino operator MGM Resorts has once again delayed the opening of its new Macau integrated resort, in part due to the project’s design.

On Tuesday, MGM’s Asian offshoot MGM China announced that the planned second quarter opening of its new $3.1b MGM Cotai casino in Macau had been adjusted to “the second half of 2017.” The company cited the complexity of the project’s design as well as the company’s “commitment to a successful opening that reflects the demands of the current market.”

This marks the third time MGM has pushed back the opening of MGM Cotai, having originally scheduled a Q4 2016 launch, only to get cold feet when Macau’s gaming market went into the toilet. A new target of Q1 2017 was set, then that was shifted to Q2. MGM’s Tuesday statement cautioned that it wasn’t ruling out further delays, given the need to obtain the required approvals from the local government.

It’s unclear what MGM was referring to when it blamed the need to reflect “the demands of the market” for contributing to MGM Cotai’s latest delay. MGM had originally pitched the new property as a haven for mass market tourists, reflecting the sharp downturn in Macau’s VIP gambling market that began in early 2014.

In other MGM China news, the company announced Tuesday that it would issue a “discretionary bonus” equal to one month’s salary to an undisclosed number of non-management staff. The discretionary bonus is in addition to the ‘special bonus’ announced last year, also equal to one month’s salary. MGM is the third Macau operator to make a bonus announcement so far in 2017, following Wynn Macau and SJM Holdings.