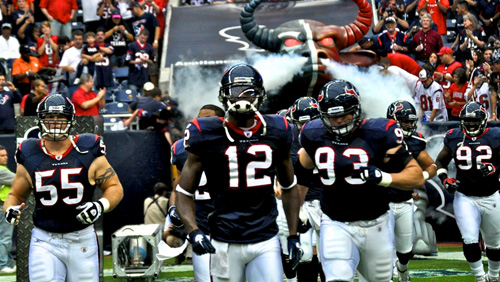 The Houston Texans (9-7) were supposed to be better than their current record after spending $72 million for quarterback Brock Osweiler in the offseason. After all, Houston had the same mark a year ago with Brian Hoyer under center before getting blown out 30-0 at home in the Wild Card round of the playoffs by the Kansas City Chiefs.

On Saturday, the Texans host the Oakland Raiders (12-4) as four-point home favorites rather than sitting as three-point underdogs like they were against the Chiefs last postseason. The big difference this time around for their opponent though is that the Raiders will be without starting quarterback Derek Carr, seemingly giving Houston an edge there.

However, Osweiler has been underwhelming at best, which is a major reason his team is +6600 to win Super Bowl LI after winning the AFC South again.

Oakland will be down to third-string rookie signal-caller Connor Cook because Carr is out and backup Matt McGloin is dealing with a shoulder injury. The Raiders are +7500 to win the Super Bowl and obviously had much higher expectations with Carr, as they are not nearly the same team offensively without him.

But the visiting team has gone 4-0 straight up and against the spread in the past four meetings, so Oakland does have that going in its favor despite being the underdog in this matchup.

In the NFC, the Seattle Seahawks (10-5-1) will begin their quest for a third Super Bowl appearance in four years when they host the Detroit Lions (9-7) as eight-point home favorites on Saturday night. The Seahawks looked to be a top Super Bowl contender again early in the year but struggled a bit down the stretch, and they are +1200 to win the Vince Lombardi Trophy for the second time while the Lions are +7500 longshots.

Detroit also was a much better team before the final month of the regular season, dropping its last three games to go from the NFC North leader to a Wild Card when the Green Bay Packers won 31-24 at Ford Field in Week 17. The Lions have gone 3-1 ATS in the previous four meetings with Seattle though, covering the number and nearly pulling off the upset in a 13-10 loss there last season as 9.5-point road underdogs.