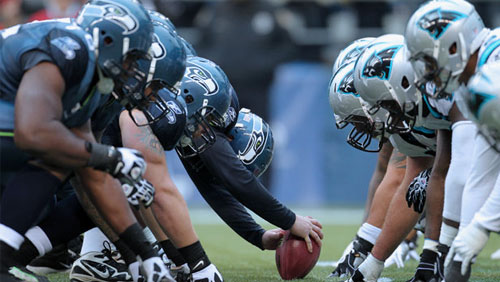 History shows the Seattle Seahawks find their form around the start of December, although it has been tough to know what to expect from Russell Wilson and company each week this season.

The Seahawks are listed as seven-point favorites against the Panthers – and Cam Newton – with a 44.5-point total for the Sunday Night Football betting matchup.

These teams have combined to represent the NFC in the last three Super Bowls, but issues along the offensive line have brought both back to earth.

Carolina is 4-7 SU and 3-6-2 ATS this season, but, according to Football Outsiders, Newton and the offense have faced the ninth-toughest calibre of opposition in the NFL. Carolina’s top WR, Kelvin Benjamin (shoulder), has missed some practice this week. If he plays, he should occupy the attention of Seahawks CB Richard Sherman. That could clear space for TE Greg Olsen and WR Ted Ginn.

The Panthers are 1-5 SU in their last six road games, and haven’t shown this season that they can protect Newton from edge rushers such as DE Cliff Avril and DE Michael Bennett. In the rushing phase, RB Jonathan Stewart is reliable, but Seattle and MLB Bobby Wagner seldom allow a big run.

Seattle is 7-3-1 SU and 5-5-1 ATS. It’s reasonable to expect that the Panthers should have SS Kurt Coleman and MLB Luke Kuechly out of concussion protocol. If so, that will boost Carolina’s run defense. Through TE Jimmy Graham and WR Doug Baldwin, the Seahawks should be able to pick on the Panthers secondary. Carolina allows 7.7 yards per pass (26th in the NFL) and struggles to limit the damage on underneath routes.

Slowing down Carolina’s pass rush will be a challenge for Seattle. With one of the NFL’s worst rushing attacks, Seattle will also count on Wilson and his receivers to convert in some obvious passing downs.