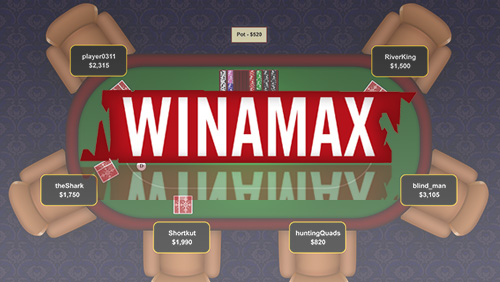 French online poker room, Winamax, is offering Dealer’s Choice cash games, prompting Lee Davy to question if this derivative of poker could overtake No Limit Hold’em as the market leader?

I would rather poke around in a horse’s ass that play with a terrible winner. But I make an exception for Eddie’s Dad Steve because he is the reason I fell in love with poker.

Before Eddie’s Dad Steve there was the old pool league. Bored of arm wrestling for money and playing Three Card Brag, one of the lads suggested a game called poker, and before long a school was born.

The game we all learned was No-Limit Hold’em (NLHE). We would gather at the pub on a Tuesday night and play in a £20 Freezeout, sink a few ales, and be home in time watch the end of Newsnight.

And then, one day, Eddie’s Dad Steve turned up and changed everything.

Is Winamax The Most Innovative Online Poker Room in The World?

Irrespective of what professional poker players might think, the creation of Spin & Go games has been a boost for recreational players. But it wasn’t PokerStars who created them. It was Winamax.

You can’t blame PokerStars for stealing Expresso poker; repackaging it and asking Cristiano Ronaldo to strip down to his underwear to promote it. It’s the way of the jungle. An online poker room creates an imaginative derivative, and everyone sticks it into the 3D printer.

And Winamax is at it again with the creation of Dealer’s Choice (DC) cash games. The French online gambling Gods haven’t created DC – the game has been around for donkey’s years – but they have managed to create the software that will allow online poker players to play it for the first time.

And it’s going to be huge.

What is Dealer’s Choice?

“Dealer’s Choice is the most fun poker game in the world because it is all of the poker games in the world.” Said author of Way of Poker Warrior, Paul Hoppe.

There are various ways to play DC. Here are the two most common.

A card room nominates a series of different types of poker. The player on the button chooses one of those games to be played for the duration of a single orbit.

Similar to the above example except the players choose the games they want to play based on the experience of the players.

The most common forms of poker played in DC are forms of Omaha, Razz, Stud, Badugi and Draw. But you can play anything you want.

Did you notice a favorite game missing from that list?

The Evolution of The Home Game

The premise was simple – tournaments was making love to your wife. Cash games were picking up a stranger in a bar and getting your rocks off in the toilet.

In the beginning, the cash games were 100% NLHE. Today, choosing to play NLHE is like walking into a bar and ordering a hot chocolate. The game has been phased out, but why?

One of the reasons people don’t choose NLHE, when playing DC, is surrounded by choice The Cadillac of Poker becomes the skateboard of poker.

“I think that change, in general, is the way forward,” Says Ilan Boujenah, “The players – whether amateurs or pros – are getting bored with certain games, and they want new games like kids want new toys.”


The introduction of games like Seven-Card Stud and Six Card Pot Limit Omaha puts more cards on the table, creates more action and increases the variety of emotions.

But that’s not always a good thing as Dan Owston explains:

“DC is more fun to play. To that, there is little doubt, and it would have an online market. It’s far more punty than both Hold’em and PLO, hugely so than the former, which limits your edge as a good player and therefore limits your profitability. It can also be slow, which is far more tedious online than live surrounded with other players to interact with. Lastly but not least, more cards out = more scope for collision. You have three players out of a 6max PLO6 game and you know 35% of cards in play, that would put me, and I’d imagine many others off.”


But it works in my local home game. I think our fish v Sharks ratio is such that the money circulates pretty well. Turning that around, when we play NLHE or four card PLO, the weaker players lose more often and are more likely to leave the game.

Making the game ‘more punty’ as Owston puts it, gives the fish belief, at least when it comes to their choice of game.

But it’s not all about the money. People abandon their edge preferring to play games that drive more action because they have more fun. There is nothing worse that a player in a DC game who folds all the time. I know because I am that guy.

“It’s a great game to play with old friends and the fastest way to make new friends at the poker table. It lets newer players learn more about poker and keeps things fresh for more experienced players.” Says Paul Hoppe.

Paul makes a few crucial points. The introduction of DC games in my local home game made us all better players. Each year, we all take a trip to Blackpool for the Grosvenor United Kingdom Poker Tour (GUKPT) and always do well in the NLHE tournaments despite hardly ever playing the game. It seems the theory behind the DC games has improved people’s foundational knowledge of poker and created more confidence.

And it’s not just in my local home game.

Walk into any casino in the UK, and there is more interest in the DC games than any other type of game on offer. I know this is different in America where NLHE tables still dominate, but how long will it be before more people like Eddie’s Dad Steve are walking into those games and showing them that the Cadillac is not the only car in the parking lot?

What is your view?

Can the Dealers Choice (DC) format take over as the most popular poker game in the world, and if so, how do the online poker rooms help push this along?