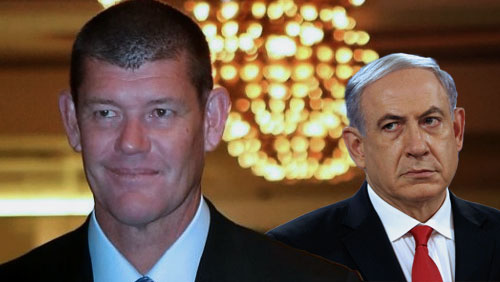 Australian casino mogul James Packer is once again back in the headlines several weeks after the indictment of his Crown marketing staff in China and his failed relationship with international singer Mariah Carey.

This time, Packer finds himself in hot water for allegedly showering the family of Israel Prime Minister Benjamin Netanyahu with lavish gifts and benefits – including tickets to Carey’s show and expensive hotel stays.

Haaretz reported that Israeli authorities are digging deeper into the supposed ties between Packer, who is trying to gain residency in Israel, and Netanyahu. It was revealed that Packer is considered a close confidant of the prime minister.

So far, authorities have uncovered that Packer has opened his Tel Aviv apartment Netanyahu’s son Yair for few free nights and even paid the bill of the younger Netanyahu and Netanyahu’s delegation to the United Nations General Assembly in a luxury hotel in Greenwich Village.

Packer reportedly bought large number of tickets worth “tens of thousands of shekels” and gave 10 to Sara Netanyahu, Drucker said, and another seven to Yossi Cohen, then head of the National Security Council and now the director of the Mossad.

Many suspect that the Australian billionaire’s generosity to Netanyahu and his family boils down to his desire to become an Israeli resident. Packer is not Jewish but no one knows why he wanted to move to the sole-Jewish nation.

One possible motive of Packer to transfer his residence to Israel, according to the report, was Israel’s tax break to new immigrants. A 2008 law exempts new immigrants from paying tax on their foreign assets for ten years.

Jacob Weinroth, counsel of Packer, reportedly met with Interior Minister Aryeh Deri and asked him to grant Packer, who is not Jewish, permanent residency in Israel. The interior minister is authorized to take such measures. Weinroth was previously Netanyahu’s attorney.

Deri, for his part, refuted the claim that he has received a formal residency request from Packer. He, however, confirmed that the billionaire had made a preliminary application to the Israeli tax agency. Opening a file is a prerequisite to attaining residency for wealthy potential emigres.

Another motive that drives Packer to live in Israel was due to the business opportunities in the country. It is a known fact that he has investments in the online space with Zhaopin and Square Peg Capital.

Last year Square Peg led a $60 million injection for an Israeli startup, Fiverr: a microtasking website, specializing as a marketplace for digital skills.

Las Vegas Sands may be interested in Crown, Okada acquisitions
Erik Gibbs
7 May 2020
.