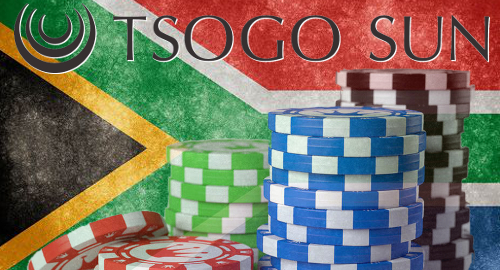 Gaming win was up a “disappointing” 3% to just under R3.7b, as slots win rose 1% to R2.74b and table games gained 12% to R938m. The company’s high-end ‘privé’ market “continued to perform well” despite volatility in win rates, while the main floor gambling business remained “under pressure.”

Tsogo Sun operates 14 gaming venues in six provinces, with the bulk of gaming win (R1.98b, +3.8%) coming from its three wholly owned operations in Gauteng. The three properties in KwaZulu-Natal contributed just over R1b (+0.3%) following a “notable slowdown” in business. The two Mpumalanga venues anted up R288m (+2.6%) and the three venues in the Western Cape added R233m (+0.8%).

The South African hotel division’s revenue improved 22% to R1.5b thanks to contributions from the Holiday Inn Sandton and Crowne Plaza Rosebank hotel businesses from March 2016. Revenue per available room gained 8%, primarily on the strength of increased room rates, as occupancy nudged up a mere 0.4 points to 62.9%.

The ‘offshore’ hotel division’s revenue was flat at R337m due in part to the strengthening of the South African rand against the US dollar and the Euro. The company notched forex losses of R57m in H1, up from just R6m in the same period last year.

Looking ahead, the company expects trading to remain “under pressure” for the foreseeable future, given the weak state of the local economy and in the other commodity-focused African countries in which it operates (Kenya, Mozambique, Nigeria).

Tsogo Sun holds a 25% stake in International Hotel Properties Ltd, a European offshoot that controls eight UK hotels. Tsogo Sun CEO Marcel von Aulock told Reuters that his company would look to acquire some additional hotels in the UK following the Brexit vote, which led to “the collapse of the pound … Those UK hotel assets just got a whole lot cheaper in rands.”