Derek Carr and the Oakland Raiders, just as they did prior to their bye week, will try to prevail in a matchup of opposites when they face the Houston Texans on Monday Night Football. 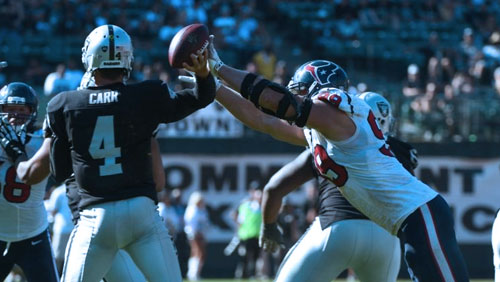 The Raiders are listed as the six-point favorite against the Texans with a 46-point total in the Monday Night Football betting matchup at Estadio Azteca in Mexico City. An Oakland cover pays -115, while a Houston cover pays -105.

The Raiders are on a three-game winning streak but are just 4-14 straight-up in their last 18 games after consecutive wins. The Texans are 2-8 SU in their last 10 games as an underdog of 5.5 points or more.

Houston, which leads the AFC South division standings, is 6-3 SU and 5-3-1 against the spread. It is fair to say that QB Brock Osweiler has not lived up to expectations after landing a big free-agent deal, even though the Texans have surrounded him with adequate protection and a decent rushing attack built around RB Lamar Miller.

Osweiler’s issues with indecision could lead to a sack or two for Raiders DE Khalil Mark and a couple takeaways by a defense which gives up yards, but is also opportunistic.

The AFC West-leading Raiders, who are 7-2 SU and 6-3 ATS on the season, are maturing into a well-rounded offense. They will be challenged in the passing phase, since Carr’s favorite targets, WR Michael Crabtree and WR Amari Cooper, have tough matchups against Texans CB Kareem Jackson and Johnathan Joseph.

Houston’s third CB, A.J. Bouye (ankle), will be in his first game back from injury and there could be some mismatches for WR Seth Roberts on third and long.

Houston can cover and pressure the passer, but is 26th in the league in run defense. Raiders LT Donald Penn and RT Menelik Watson should be able to open holes for RB Latavius Murray.