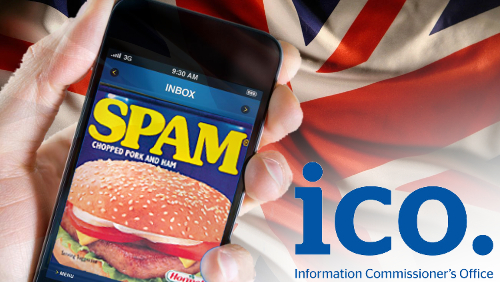 The UK’s data watchdog has warned hundreds of online gambling affiliates to lay off the spam messages or face the consequences.

On Thursday, the Information Commissioner’s Office (ICO) posted a notice saying it had written to over 400 companies it believes are improperly using individuals’ personal details to promote gambling services via text messaging services.

David Clancy, the ICO’s anti-spam investigations manager, said his group was prompted to act after receiving complaints from customers who were subjected to unwanted gambling promo offers from affiliates. Clancy said the ICO was also acting on “intelligence from other sources.”

The ICO said it has become aware of “particular problems around affiliate marketing” in the gambling sector. In many cases, neither gambling operators nor their affiliates were “taking any responsibility for complying with the rules” regarding personal data misuse. Clancy said “not knowing the law or trying to pass the buck to another company in the chain is no excuse.”

The ICO warned companies that fail to respond to its requests that it has the power to compel them to provide the requested information. Should the ICO determine that a company has violated data laws, it could take enforcement action, including fines of up to £500k.

The ICO’s missive coincides with the release of its new code of practice detailing companies’ obligations in explaining to people how their personal information is being used.

The UK online gambling industry has come under increased regulatory scrutiny from a variety of fronts in the past few weeks. The Competition and Markets Authority has launched a probe of operators’ terms and conditions, while the UK Gambling Commission announced a review of gambling’s ability to advertise on television and of retail betting operators’ fixed-odds betting terminals.

Just this week, UKGC CEO Sarah Harrison warned operators to step up their game in terms of making consumers the focus of business decisions and also in the area of anti-money laundering compliance, while threatening license reviews for operators who fail to abide by these edicts.

All told, the regulatory assault almost makes you wonder why this year’s John Lewis Christmas advert didn’t feature a forlorn betting operator finding no presents under the tree. Probably because the outlook is so dire that marketers couldn’t figure out how to turn that frown upside down at the end.