Home / Press Releases / US Presidential Poll: Trump Up 5 on Clinton 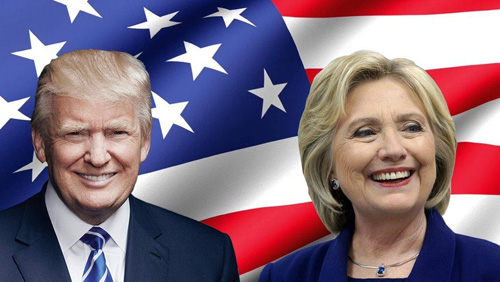 Washington DC (7th November 2016) – According to the Democracy Institute poll – the only public poll to predict both the winning side and the victory margin in the UK’s Brexit referendum – Republican candidate Donald Trump enjoys a five-point margin over Democratic candidate Hillary Clinton on the eve of the presidential election.

The new poll finds Trump establishing a clear lead over Clinton, 50 percent to 45 percent, among decided voters. The outcome nevertheless remains in doubt, as an unusually large number of undecided voters (10 percent) could yet swing the election Clinton’s way, although their eventual, disproportionate support for Trump is the more probable development. “If these late deciders end up voting for Trump,” observes poll director Patrick Basham, “he could trounce Clinton by as much as 10 points in the popular vote.”

“Counterintuitively, perhaps the best news for Trump concerns African American voters,” notes Basham. “Trump’s national support among African Americans is twice that of Mitt Romney in 2012. And, critically, early and absentee voting totals across the country reveal overall African American turnout is down significantly, especially in Midwestern states, which could prove fatal for Clinton’s chances.”

The poll’s best news for Clinton is her overwhelming support among Hispanic voters. “Although Trump is doing better with Hispanics than most experts predicted, Clinton will win the Hispanic vote by a massive amount,” Basham says. “Coupled with high Hispanic turnout to-date in early and absentee voting, these voters would be the key to Clinton winning the presidency,” he concludes.

The fieldwork for this survey of a randomly selected national telephone (landline and cell) sample of 1,390 likely voters was conducted by the Democracy Institute’s polling unit from November 3rd to November 6th 2016. Ninety percent of the fieldwork was completed before FBI Director James Comey’s November 6th announcement that Hillary Clinton would not face charges regarding her State Department email scandal.

The survey was conducted via interactive voice response, in which recorded questions were played for randomly-dialled respondents and answers were given via their telephone keypads. The poll has a margin of error of +/- 2.5 percent at a 95 percent confidence interval. To ensure a representative sample, the results were weighted for key demographic and political variables including, but not limited to, party identification, gender, age, education, income, region, voting history, and cell phone-only households. The party identification turnout model is: Democrats = 34 percent; Republicans = 32 percent; and Independents = 34 percent.