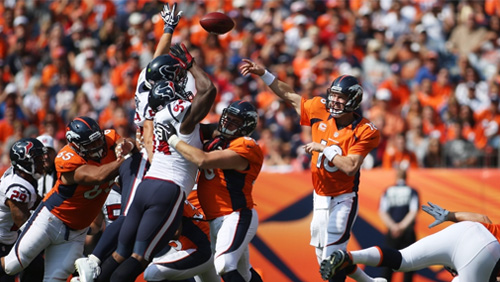 Judging by how the line has moved, there is anticipation that the Denver Broncos will be out to show Brock Osweiler why their management let him walk.

The Broncos are listed as a nine-point favorite against the Texans – quarterbacked by Osweiler, who was Denver’s starter for part of their Super Bowl season – for their Monday Night Football matchup. There is a 41-point total.

Denver opened as a 6.5-point favorite. The Broncos are 4-2 both straight-up and against the spread, despite a two-game skid. The Broncos are 7-0 SU and 5-2 ATS in their last seven home games after losing their most recent home game, which supports the reasoning they are too strong to lose three in a row.

Quarterback Trevor Siemian was out during Denver’s first loss and played through shoulder pain in the second, but back-to-back primetime games will give him a 10-day recovery period. The trade-off of having extra rest is that Siemian will face a premier pass defense, as Texans OLB Whitney Mercilus and OLB Jadeveon Clowney are strong edge rushers.

Houston also allows only 189.3 passing yards per game, as CB A.J. Bouye has emerged as a complement to CB Kareem Jackson. That said, Houston has shuffled their secondary after putting CB Kevin Johnson on injured reserve.

Something will have to give in the matchup between Denver’s sputtering rushing attack and Houston’s run defense, which allows 4.2 yards per carry. Backup RB Devontae Booker has had more zip than veteran C.J. Anderson, which might prompt a change in their usage.

Houston, 4-2 SU and 3-2-1 ATS on the season, is just 2-8 SU in its last 10 games as an underdog of 7.5 or more points. Both of their losses occurred when Osweiler struggled to generate offense against the top defenses of the New England Patriots and the Minnesota Vikings.

That scenario might play out again if Osweiler fails to curb his tendency of forcing deep balls into tight coverage. Doing so would, literally, play into the hands of a secondary where CB Aqib Talib and CB Chris Harris are matched up against the likes of WR DeAndre Hopkins and WR Jaelen Strong.

Osweiler has a relatively good sack rate, so Houston might have some chance of slowing down OLB Von Miller and OLB DeMarcus Ware. The Texans will likely try to keep RB Lamar Miller as busy as possible, both as a ball carrier and receiver.