India’s Supreme Court (SC) has ordered sweeping reforms inside the Board of Control for Cricket in India (BCCI), opening the door for the possibility of a legalized sports betting in the country. 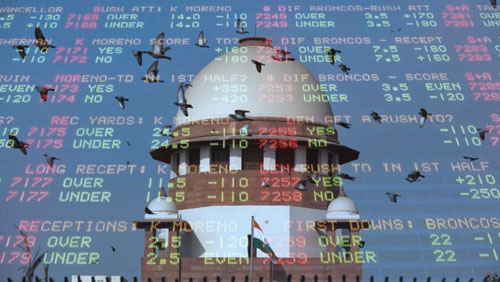 On Monday, the SC accepted major recommendations of the Lodha Committee on reforms including a bar on ministers and civil servants and those above 70 from becoming its members.

But the highlight of SC Chief Justice TS Thakur and Justice Ibrahim Kalifulla judgment was it adapted the recommendation of the committee – headed by retired Chief Justice of India R.M. Lodha – to make sports betting legal through an enacted legislation, according to Lawyer Vidushpat Singhania, a sports law expert and a partner at Krida Law.

“The Supreme Court yesterday has directed the Indian legislature at the central level to consider legalization of sports betting within the country,” Singhania, which provided a softcopy of the judgment to CalvinAyre.com, said in an e-mail.

In 143-page judgment, the magistrates agreed with the committee that sports betting and match fixing were not the same bananas when they gave their stamp of approval for the legalization of sports betting in India.

The SC, however, left the decision to make sports betting legal in India to the Parliament since the issue “involves the enactment of a Law which is a matter that may be examined by the Law Commission and the Government.”

“While the latter [match fixing] interferes with the integrity of the game and attempts to change the course of the match, the former [sports betting] is a general malaise indulged by different sections of the society not only with reference to cricket but other games also,” said the ruling. “The Committee considers the match/ spot-fixing as unpardonable and opines that the only way to deal with the same effectively is to make it punishable by law. The Committee in that regard recommends appropriate amendment by the legislature.”

The SC pointed out that betting by administrators Players, Match Officials, Team Officials, Owners, etc., should continue to be an offense under the BCCI and IPL Rules and Regulations.

As safeguard against match-fixing, the SC suggested certain measures like preparing Cricketers Handbook for young players, arranging lectures and interactions with cricket players and sport persons of unimpeachable integrity with regard to game ethics.

“The Committee has on the basis of responses and opinions tendered before it, recommended to the legislature to make the same legal with certain safeguards enlisted in the report,” it said. “ The Committee has made certain recommendations to fulfill the need to educate and sensitize young players and debutants about the game ethics and the need to inculcate discipline and integrity among players.”