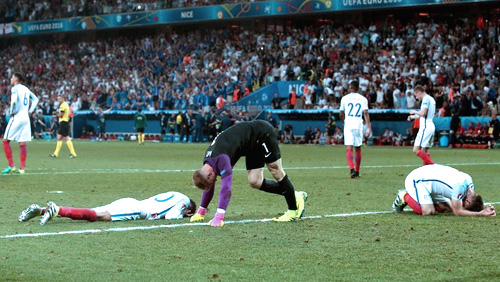 After Iceland inflicts a humiliating defeat against England at Euro 2016. Lee Davy gives you seven reasons why England not only failed to beat Iceland but neglected to put in a decent performance in any of their games.

It cuts way deeper than that. England tried and failed to break down a useless Russian side, was fortunate not to get beat by the Welsh, and failed to find the net against a Slovakian team ripped to shreds by the Germans.

England was awful throughout.

We were always going to have an Iceland and here’s why?


In a year of incredible footballing Cinderella stories, it’s worth remembering that one of the reasons Leicester City won the Premier League was because Claudio Ranieri hardly ever changed his team.

When you look at England’s squad, there aren’t many in world football that has so many great individual players across every position. But as Iceland reminded the world, football is a team game.

After England’s shocking defeat at home to the Netherlands in March, they had three friendly matches against Turkey, Australia, and Portugal before the opening group game against Russia.

What a fantastic opportunity to play his starting 11 in all three games, and to get used to the system Roy Hodgson wanted his team to play. Why does he want to see what players can do? Doesn’t he own a television?

By the time we were beating Portugal at Wembley, nobody knew what the starting 11 was going to be, or what system he was going to deploy? And that’s one of the main reasons England caught the early train back through the Chunnel.

The England team never looked like a team, and how is that possible after winning ten competitive qualifying games in succession?

Wayne Rooney remains a talented footballer, but it’s obvious to anyone who watches him regularly that he is on the wane. Roy Hodgson’s decision to make the Man Utd striker his captain caused him an almighty headache when it came to his selection in the England side.

After Harry Kane and Jamie Vardy had played so well for Spurs and Leicester, Rooney’s position at the front of the England pack, was no longer his for the taking. He should have been on the bench. Instead, after Hodgson saw Rooney playing a few decent games for Man Utd in the centre of the park, he decided that he would deploy him in that role at the Euros, and it was a decision that ultimately cost him his job.

The European Championships was not the time to continue with the experiment that Louis Van Gaal started at United. If Jose Mourinho chooses to play Rooney in that position next season he does so safe in the knowledge that he has 38 games to get it right. England had four.

When you play for England, it doesn’t matter who wears the armband. There are leaders all over the pitch. Players who scream out commands and battle cries at club level on a weekly basis.

When Iceland hit England with the old one-two, there was nobody in the England side with the experience and leadership skills to get the national heart pumping again.

Do you remember David Beckham taking on Greece all on his lonesome in 2001?

This England side doesn’t have that kind of courage and drive.

I have never been a Joe Hart fan. He makes too many mistakes, and at international level, that can mean the end of your tournament. He was at fault for the Gareth Bale free kick, a game we were fortunate to win. He was at fault for Iceland’s winner. I would have played with Fraser Forster in goal, and moving forward I think Jack Butland should be the new England #1.

I am still baffled by this one. Spain lost against Italy. They weren’t good enough. However, Vicente Del Bosque’s decision to play the same team in every game is the right way to play tournament football.

Why did England choose to make six changes in a match they needed to win? If England had beaten Iceland, they would have had to face the hosts and pre-tournament favourites France in the quarterfinals, followed by the winners of Germany v Italy in the semi-finals.

Had they beaten Slovakia, they would have won the group and faced Northern Ireland, Belgium, and then the winner of the Poland v Portugal tie. And that is the reason why Hodgson should have kept his best team on the park because a victory would have given his side an easier shot at winning. It would have also been an additional game where England could have settled into a tried and trusted formation ahead of the Round of 16 ties.

England is losing 2-1 to Iceland.

There is no pace, no power, and no professionalism on the pitch.

On the bench, is a young kid from Manchester, who is lightning, and has proven he has an eye for goal.

The only thing Sterling has in his favour is experience, and even then we are talking about a 21-year old kid versus an 18-year old kid.

It was a no-brainer, to begin with, but after Sterling’s woeful performance in the opening game against Russia the decision was made even simpler.

The game ended. The England players threw themselves onto the floor in despair. I go out, buy a cat from the local pet shop. Then, the adverts come on, and Harry Kane strolls down a darkened tunnel to the sounds of Firestarter looking like a beast in a Beats advert. I kick the cat.

Why are you taking free kicks, Harry?

Your manager says it’s because you are the teams best dead ball expert, but you kept knocking the ball over everybody’s head.

Harry Kane is going to be a star for England. I have no doubt about that. But one of the reasons England are out is because Kane chose the most important footballing period of his life to fall to sleep.

England was sent packing because they didn’t know how to play as a team. There was no known system, and Wayne Rooney was asked to play in a position that is still new to him. Joe Hart and Harry Kane had absolute stinkers at a time we needed them the most. Raheem Sterling was woeful, and I still am not sure why he kept getting picked ahead of much better choices on the bench, and we don’t have enough leaders.

On the plus side:

I thought Dele Alli had a good tournament and will be world class if his development keeps on track. Marcus Rashford looked blinding during his few minutes of fame. Kyle Walker was the best full-back in the competition.

Now all we need is a manager who won’t make the same mistakes, and I don’t think there is an Englishman up to the task.