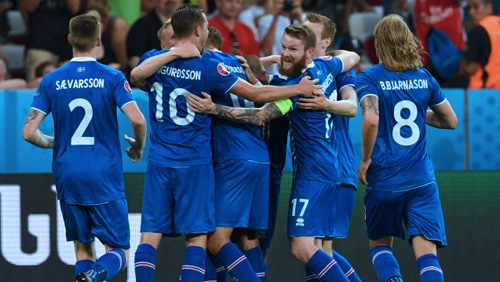 The Euro 2016 quarterfinal jigsaw is complete after England suffer the biggest humiliation in their history against Iceland, and the Italians prove too strong for the reigning champions Spain.

Shame will always remind me of the date.

Iceland, a team with the same population of Leicester, and a country without a single professional football club, have eliminated England from Euro 2016, the country that operates the richest football league in the world.

It’s been a terrible few days for the people of England. A nation of individuals who see the world through the pages of tabloid newspapers and the idiot box plunge the nation headlong into a recession and years of uncertainty after voting the leave the European Union (EU). At times of desperate need like this, we always look to our national sporting teams to evoke some sense of nationalism, and they let us down big time.

I can’t even pull any humour from the gallows. Yesterday, I believed this England side could win it. Today, I wish I was born in Cardiff. We finished second to the Welsh in an easy group, only winning one game. And we have now lost against a team that reached the Round of 16 with the lowest possession stats, shots on goal, and corners, than any other side in the championships.

And we scored first!

The players have to bear the responsibility, but you also have to question the coaching capabilities of Roy Hodgson and his team. I cannot fathom how a side that wins all 10 of the qualifying games, albeit against mediocre opposition, comes into the first game against Russia without a clearly defined, and tried and tested, lineup and style of play.

The unanswered questions make my brain feels like a Pinata.

Why was Raheem Sterling selected ahead of Adam Lallana?

Why was Harry Kane taking a free kick over on the touchline in the 88th minute?

Why was Marcus Rashford only given six minutes to try and make a difference when it was so blatantly obvious that 11 chickens were wearing the white of England minus a head?

Germany and Belgium destroyed Slovakia and Hungary after scoring that early goal. When Wayne Rooney gave England the lead from the penalty spot, after only four minutes, I could see the landslide from a mile away.

England kept that lead for two minutes after they failed to deal with a long throw by Aron Gunnarsson and Ragnar Sigurdsson escaped from the clutches of Kyle Walker to slide the ball underneath Joe Hart from close range.

It was a kick in the nuts. And before England could give them a good rub and get their breath back, Iceland was ahead after Kolbein Sigthorsson’s low shot sneaked underneath the arm of Hart. It was a shot that should never have beaten the England keeper, and I for one would like to see a change in between the sticks.

When the second goal went in, I barely budged from the couch. There were 70-minutes left. We had Wayne Rooney, Dele Alli, Harry Kane, and Daniel Sturridge on the pitch. The equaliser and subsequent winner were inevitable. Our berth in the quarterfinals against the host was secure.

How wrong I was.

England’s second-half display was the weakest, shameful, and inept performance I have ever seen from any football side, at all levels of the game. Iceland had the better chances with 32% possession. In truth, England should have lost by a greater margin, and as it transpired, the only person in the England set up to make a correct decision tonight was Roy Hodgson when he resigned immediately after the match.

So what next for England?

Gareth Southgate is the 4/1 favourite to take over the laughing stock of world football. Gary Neville, who has also resigned along with Hodgson and his assistant Ray Lewington, is 6/1. Alan Pardew is 8/1. Brendan Rodgers is 10/1.

I don’t feel comfortable with any of them at the helm.

As for Iceland, they will face France in Paris on Sunday for a chance to reach the semi-finals of Euro 2016, despite my Google Calendar showing that it’s England v France.

Italy Stun Spain And Become a Real Force in This Competition

In yesterday’s review, I wrote about the negative mindset of the Italian camp, and how they would build a wall from which they would never emerge. I also said that Spain was simply too good for Italy, and they would find holes in that wall.

How wrong I was again.

Italy soundly beat Spain in the Stade de France. The capitulation of Vincente Del Bosque’s side was nowhere as shocking as England’s, but it was a capitulation nonetheless. Spain played without pace, thought, or drive. How often has anybody been able to say that about a team that will go down as one of the greatest of all time?

Italy was attack-minded from the moment the worse referee in the contest blew his whistle. Antonio Conte prowled the touchline like a Sabre Tooth Tiger, and his energy and determination was eaten alive by his team. It was as solid performance as I have seen all competition, and they have become serious contenders for the title after pushing Spain aside with ease.

The final margin was 2-0. If it weren’t for the heroics of the world’s greatest keeper, David De Gea, the margin would have been wider. Giorgio Chiellini reacted quicker than anyone else to poke the ball home after De Gea had spilt a free kick in the 33rd minute. Southampton’s Graziano Pelle volleyed Italy into the quarterfinals in injury time as Spain went in search of an equaliser.

There is no rest for the Inglorious Bastards, as Gianluca Vialli said the Italian backline like to call themselves; Italy now faces the World Champions Germany in the next round. Spain will head home and rebuild. Vincente Del Bosque will most likely step aside after eight years at the helm of the most successful country in recent times.

I, on the other hand, will stop trying to predict the outcome of football matches because I obviously know as much as England know how to play knockout football.