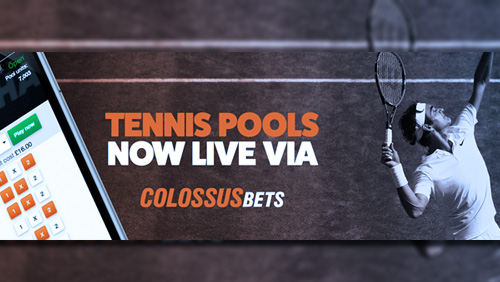 London, June 2016 – COLOSSUS BETS, home of the world’s biggest football and sports jackpots, today announced the launch of tennis pools with cash-out, served up in time for Wimbledon.

Bernard Marantelli, founder and CEO of Colossus Bets said: “With 20 partners now live we thought it was time to extend our sports pools to tennis and in particular Wimbledon. In our head to head tennis pools, punters will need to decide if Djokovic will progress further than Murray in the tournament, or go with the draw if they think both players will be eliminated at the same stage.

At the end of each day’s play, cash-out offers will be made to punters whose tickets are still live in the pool. With significant guaranteed minimum pool sizes, including a £50,000 Pick 15 and with cash-out offers to contemplate every evening, these tennis pools should be a massive hit with our partners in Asia, Africa, and especially Europe.”

Colossus Bets is a multi-award-winning pool betting operator, offering the world’s biggest sports jackpot bets including the £10,000,000 Colossus. The company’s B2C offering launched in 2013 and since then Colossus Bets has signed almost thirty B2B agreements for the distribution of its pools, with twenty live partners including Betclic, Betfair, Betdaq, Ladbrokes Australia, Matchbook, Bet Construct and ONEworks.

Colossus Bets has pioneered partial cash-out and has been granted a series of patents in relation to the functionality across all forms of betting and gaming. This technology has been used to build the world’s first cash-out slot game, the ‘Colossus Fracpot’, which went live on Sky Vegas in September 2015 and is the first of a number of ‘Fracpot’ slots being rolled out to a series of operators in 2016.