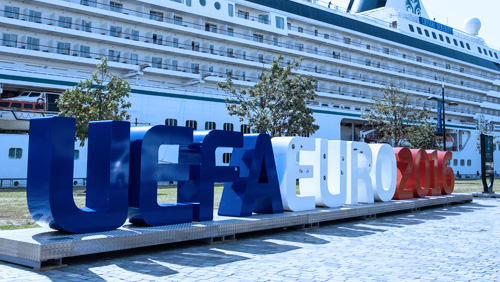 With the Euro 2016 group games in the bag, Lee Davy shares his views on the good points, the bad points, and the downright ugly points of what has been the largest finals in European Championship history.

Euro 2016 begins on Saturday when Switzerland take on Poland in Saint-Étienne. The group games were like the early seasons of Breaking Bad. The tournament showed us the cast; we loved some; hated others. And now the plot thickens. We are about to watch the final season. All the loose ends will be tied up. It’s time for sensory overload.

It’s the first time since the Euros was born in 1960 that 24 teams have contested the finals. It will be interesting moving forward. Will we eventually see a 32 team competition like the World Cup? Or, will the 24 team format be considered a failure and therefore a move back to 16 deemed necessary?

Here are my views on that question, along with my opinion of the action on and off the field during the group stages.

{*} England is my first team, but I support Scotland, Wales, Ireland, and Northern Ireland with as much gusto. Scotland was the only home nation not to make it to the finals, but they came mightily close.

Although Wales topped Group B, they are still one of the minnows of this tournament, as are Northern Ireland, Iceland, and Hungary. The extension of eight teams in Euro 2016 has allowed smaller countries to take up arms against the big boys, learn the rules of war, and get bloody.

Except Daniel Sturridge’s late winner against Wales, my most magnificent memories of the group stages relate to the underdog chewing on bones far too big for them, and I think it’s good for the competition overall.

{*} I have been watching major football tournaments since 1982. The last World Cup in Brazil was my least enjoyable experience. The unsportsmanlike antics of the players reached new heights with the game being stopped incessantly due to blatant simulation. I almost gave up on football altogether.

Euro 2016 has given me new hope. The officials have gotten their whips out and used them to good effect. The biggest change I have noticed is the desire of the referee to let the game flow. It’s a change in attitude that has led to a shift in attitude by the players, who are now more likely to stay on their feet.

{*} The bigger the tournament, the more games of football we get to see, and that’s great news for fans of football, advertisers, and the financial earnings of the hosts.

{*} The minnows have been able to flourish, and this will lead to an injection of interest in their home countries, and this is great news at a time when advancements in technology mean our children would rather learn how to play football on a PlayStation. Also, players from those smaller nations are in the shop window, and could get a big money move after the tournament ends.

{*} I haven’t stopped crying. The smaller nations bring so much pride, purity, and passion. There is no greater sporting feeling that watching Robbie Brady scoring the winner against Italy in the last five minutes and then running to celebrate with his family in the crowd with tears streaming down his face. It’s as if the players decided to bring an axe down on the poker school and used the time to watching Brene Brown TED Talks.

{*} The move to 24-teams means it’s more difficult NOT to qualify from the group stages, especially for the larger nations. Teams know this, and it’s affected performances. Assessing England’s three matches as an example. Roy Hodgson’s side played three games against teams who played for the draw, with the worse example being the mundane, Mary Poppins type clash against Slovakia. In my opinion, the group games have been mostly dull affairs.

{*} There is no point having an official standing by the goal if they don’t get involved. Wave that stick man, wave it. I have no idea why we don’t just save some payroll costs, get rid of most of the officials and use greater technology to get all of these decisions spot on. It works in rugby, and the flow is not disturbed. Instead, it adds to the excitement of the game.

{*} The extension to 24-teams means there are more games in these finals than ever before. It’s affecting my productivity, and I am running out of excuses to give to the wife. It’s difficult to explain to your loved one how busy you are when you can carve out six hours to watch football every single day.

{*} The decision-making process for selecting the four best third place qualifiers could have been a disaster. Fortunately, goal difference saved UEFA from embarrassment. How can you have a format that allows teams to progress based on their UEFA National Team Coefficient Ranking System?

{*} As a Man Utd fan, Cristiano Ronaldo used to drive me crazy when he would take free kicks. Yes, the lad scored the odd wonder goal with that unusual style of his, but he was hardly David Beckham. When the former England captain used to step up the plate, you knew the ball was going into the back of the net. When Ronaldo stepped up, you knew it was going into the stands.

Beckham scored 15.4% of free kicks taken in the main finals. Only Thomas Hassler had a better record with 20%. During the game against Hungary, Ronaldo moved his success rate at European Championships close to the 40 taken, and none scored mark. He has scored 41 direct free kicks in 594 attempts in club football for a 6.9% success rate.

Why it bothers me so much to write about it is what is says about the man and the impact he has on his team Sir Alex Ferguson would say ‘no one man is bigger than the club’. It seems Ronaldo thinks he is.

Why aren’t the other players telling him to step aside?

Why doesn’t the manager tell him to stop taking them?

Or, as BBC Pundit Thierry Henry said, “Why doesn’t he just cross it?”

{*} Unfortunately, the Euro 2016 finals will be remembered for the violence off the pitch. You shouldn’t end up in a coma when going to watch your national side playing football. The world was crossing fingers and toes that there wouldn’t be a terrorist attack, and the terror came from the very heart of the game.

{*} Finally, I’m sorry all of my Italian friends but your football team drives me mad. They are so negative, and your ability to set up camp in your own half and then steal the one or two goals that you need makes me want to poke myself in the eye. And don’t get me started on the way your defenders defend crosses. Shirt tugging is the norm. You guys are on a different planet.

The Odds Courtesy of Bodog