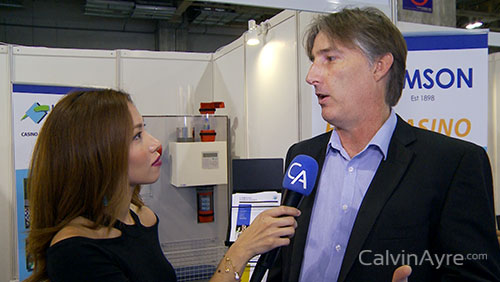 In this interview with CalvinAyre.com’s Stephanie Raquel, David Schmidt of Lamson Macao Ltd introduces Lamson RoboCasino and how it is going be beneficial for the gaming industry.

There’s no denying that the world is at a turning point of yet another economic revolution – a kind of revolution involving the rise of intelligent machines in the labor force.

In Macau, a sexy slender brunette robot named Min was introduced to the public last November. Min and her clones were tasked to work as poker dealers in casinos in order to lower labor costs.

Recently, another robot named Lamson RoboCasino was introduced in Macau by David Schmidt of Lamson Macao Ltd, which is tasked to deliver playing chips, cards, and cash to a secure location. The robot has a payload of 65kg and it can also pull a container that’s a 130 kg.

Schmidt says their company, which mainly does cash tube systems, created Lamson RoboCasino in order to take away the labor intensive part of moving chips from one port to another port and also acts like a courier.

“It interacts with the public so it will move around on the same course throughout the day and will travel to set points given to it and it could find its own way through a crowded area,” Schmidt told CalvinAyre.com.  “And a casino, to move anything in a casino is really hard to do anyway – you need security, you need CCTV (closed circuit television), you need a lot of stuff to come around with you to move anything. So the robo courier can do it without any security. It’s a lockable unit so it can operate anytime with no one getting worried of where it’s going.”

But aside from casinos, Schmidt says that Lamson RoboCasino is as dependable as a butler service since it can take the visitor’s bags to their rooms upon checking in the hotel, as well as bring up anything to their rooms.

“Whatever you want to do to a hotel it can deliver, so it benefits that way. You’ve taken away the labor side of moving, manually moving from one spot to another,” he said.

Truly,  artificial intelligence and robots are going to be a big part of the future workforce. As the intelligent machines begin their march on labor and become more sophisticated and specialized than their cousin Siri, robots will soon overhaul not only the gaming industry, but the global economy in general.