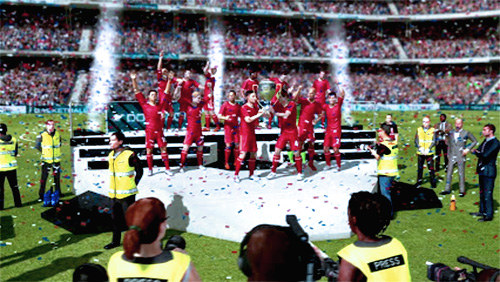 England fans are facing at least another two years of hurt, while Portugal and Turkey looks like the outsider bets.

Portugal and Turkey looks like the outsider bets Sportradar, Betradar’s unique EURO CUP virtual football tournament product has run through the tournament 480 times since it launched in May and the data shows that Germany and France are worthy favourites.

The Virtual EURO CUP is based on real Sportradar data, including recent player and team performances. Since a whole tournament is run through every 70 minutes, punters have been able to experience the ups and downs of following their team hundreds of times

Germany are unsurprisingly good at getting to finals but at least as far as the statistics shows, they particularly excel at lifting the cup once there. Of the 480 tournaments run so far, Germany reached the final 155 times or a 33% success rate. But Germany won 99 of those, which translates into a 66% success rate once in the final and a 21.5% success rate overall. This tallies quiet neatly with the country’s best-priced 9/2 odds.

The data also seems to support the case for favouring France, albeit not quite to the same degree. The hosts reached the final in 144 instances over the period and won just under two-thirds of their appearances giving them an overall success rate of 19.6%. In betting terms they are therefore slightly shorter than the data might be said to justify at best-priced 16/5.

Football’s not likely to be coming home

In total, 20 out of the 24 countries taking part in Euro 16 have won the tournament from the 480 versions of it that have played through. Among the unlikely winners are Iceland and Slovakia which each ran out the winners in one running of the virtual tournaments.

Among those that appear to be too short according to the data are England, which ran out as winners 25 times out of 480 at a win ratio of just over 5%. This would translate into odds of roughly 20/1 compared to the actual odds offered for Roy Hodgson’s team: a best-priced 9/1. But England are not alone in being over-priced: Spain won the Virtual EURO CUP 43 times out of the 480 tournaments i.e. just over one in 10 compared to their best-priced odds of 11/2.

Neale Deeley, Managing Director of Virtual Sports at Betradar, said: “The results show just how real our Virtuals product is when it comes to predicting game and tournament outcomes.”

He added: “It may not surprise anyone that the top two in the betting market are the likeliest winners of the Euros, but we have the data that proves just about anyone can lift the trophy if results go their way to set up the last 16 the right way.”

“It adds an extra layer of verisimilitude that we can also see where patriotism (in the case of England) and reputation (in the case of Spain) would appear to be influencing betting prices rather than actual data.”

In contrast to England and Spain, the data points to some under-priced teams, in particular Portugal, which in the Virtual EURO CUP won out 42 times, just behind Spain, but is best-priced at 22/1 by the bookies.

For those that think that after Leicester City’s success in the English Premier League that this is the year of the underdog, they might want to take a look at Turkey. According to the Sportradar data, they won the virtual tournament 18 times or just under 4% of the time which would equate to odds of circa 25/1 but the team is widely available at 80/1 to win the real thing.

Those looking for an upset might also want to look at the odds on big tournament debutants Wales, which won the Virtual EURO CUP 10 times so far(or 2.2% success rate) yet also has odds widely available at 80/1.

Said Deeley: “Despite the data showing they are poor value, I’ll still be betting with my heart when I put my money on England. Until they get knocked out, probably on penalties, I’ll cling to the dream and the fact that, at 5% of virtual wins, statistically they should win every 80 years on average and they haven’t done it in the last 56 years so seems now it’s about time!”

Sportradar is a global leader in understanding and leveraging the power of sports data and digital content for its clients around the world. We provide cutting-edge solutions and services to media companies, bookmakers, sports federations and state authorities. We are a truly international organisation, employing over 1,300 people in more than 30 locations around the world. Our rapid growth is driven by technological innovation and a deep understanding of our clients’ business needs.

It is our commitment to excellent service, quality and reliability that makes us the trusted partner of more than 800 companies in over 80 countries. We occupy a unique position at the intersection of the sports, media and betting industries:

• Under the Betradar brand name, we are the leading provider of live data services to the betting industry, offering products to suit every business: from data collection through to fully managed trading services.

• With our Live Channel, backed by our extensive portfolio of audio-visual rights, we offer round-the-clock coverage of live sports content streamed to betting websites and betting shops around the world.

• We are leaders in the provision of Virtual Sports content and sports betting games, with customisable solutions offering the ideal mix of realism, profitability and punter appeal.

• Our focus on technology and innovation has made us a premium partner for the media industry, offering sports content solutions for online and mobile customers, from live scores and statistics, to match visualisations and apps.

• Uniquely in our industry, we also leverage our data to provide betting monitoring services to sports federations and law enforcement agencies to help in the fight against match-fixing. In the field of sports integrity, we are now firmly established as the world’s leading supplier.

Director of Communications and Public Affairs