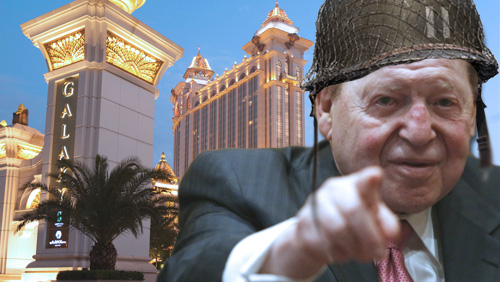 Hell is on the verge of breaking loose once again as Sands China chief Sheldon Adelson and Galaxy Entertainment Group (GEG) find themselves locked in yet another heated word war.

GEG came out swinging on Friday and– without mincing words – calls Adelson “impolite” and “unprofessional” in a bitter response to the feisty American casino mogul’s remark that the Galaxy Phase 2 and Studio City are not as good as his new project, The Parisian, according to Macau Business Daily.

In an act of retaliation, GEG takes a jab at Adelson’s irresponsible comment, saying that it is deeply disappointed with the Sands China executive.

“Galaxy Entertainment Group (GEG) would like to express its deep disappointment in his unprofessional behavior.  Belittling the competition through unfair comments benefits no one,” according to the GEG statement sent to the news agency.

A report released by investment firm Sanford C. Bernstein last week quoted Adelson saying that “a lack of differentiation and distinctiveness of the new casino properties” was the reason why Galaxy Phase 2 and Studio City failed to draw new visitors in Macau’s shores.

The unapologetically brash Sands chief also took a swipe at the other GEG properties by saying that GEG’s new casino tower looks identical to its previous tower. The Bernstein analysis also quoted Sands as saying that “the opening of Parisian with its unique attractions may change [the situation in driving new visitation].”

Irked by Adelson’s remarks, the HongKong-based operator chided the casino mogul for his“ignorance” on Macau gaming business and pointed out that the lack of change in visitor numbers is due to the overall global economy and the performance in each industry.

“Overly simplifying the reason for the lack of growth in Macau’s visitor arrivals, brings into question his understanding of the business,” the gaming operator said.

GEG also pointed out that Macau have been “offering distinctive facilities and amenities as well as exceptional services to attract visitors rather than blindly copying others.”

This is the second time that Adelson and GEG found themselves in a heated argument with each other.

Last July, Adelson called out GEG for its business missteps during a company conference, saying that “Galaxy made an enormous mistake. The other companies will make big mistakes. They’re already making big mistakes. Now don’t ask me what they are doing because I don’t want to stop them from making mistakes in the future.”

LuiChe-woo, founder and chairman of GEG, shot back at Adelson by saying: “Holding his head high to other operators in the same industry and offending others by words should not be the acts of a high-status person.”