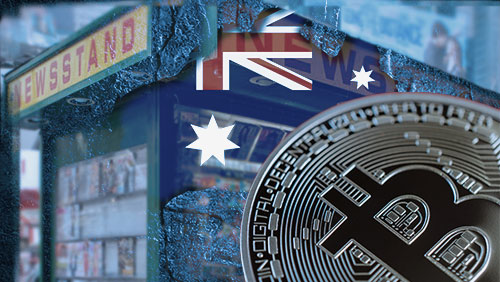 Can you buy bitcoins during a morning run? If you’re in Australia, sure.

Aussies are now able to buy Bitcoin along with newspapers and a pack of gum, thanks to two tech start-ups, which have started rolling out over-the-counter digital currency platforms in some 1,200 newsagents in the land down under, the Australia Financial Review reported.

This is a first-of-its-kind solution for buying bitcoin with cash since bitcoin exchanges, particularly in Australia, typically facilitate transfers and trades online.

Bitcoin.com.au general manager Rupert Hackett said the goal is to promote trust in digital currency by “providing a tangible experience.” In an interview with Mashable Australia, Hackett admitted “it’s hard to trust the current bitcoin exchanges because the process is very vague to the consumer.”

The system makes use of an iPad—installed at each newsagency location—which contains an application that connects to Bitcoin and its platform, and the companies will take a 4 percent commission on bitcoin sales.

The minimum transaction is initially set at AU$50, but Hackett said they are looking to drop the amount to ideally AU$1.

Blueshyft and Bitcoin.com.au are expecting their joint venture to have about 15 million transactions of between AU$150 to AU$200 in the first year alone.

But if you have more cash to spare, the Australian government is planning to auction AU$16 million (US$11.49 million) worth of confiscated bitcoins soon. According to financial services group Ernst and Young, the sale is scheduled to take place on June 20 and 21 and will involve 24,518 digital currency coins.

The coins, which according to Ernst and Young were “confiscated as proceeds of crime,” were believed to be from an Australian man who was convicted of commercial drug trafficking charges in 2014.

The auction is not limited to those living in Australia. On Friday, the price of bitcoin rose to US$548.02, its highest level since August 2014, with 314.35 million bitcoins in circulation.