We’re finally here. This is the NBA Finals rematch that everyone had been waiting all year for, and if you believe conspiracy theorists at large, it’s one that the league itself was pining for in a big way. Now the matchup is set. The Cleveland Cavaliers and Golden State will wage war yet again in a series that will define legacies.

How you bet this series essentially comes down to answering one simple question: Are the Cavaliers better than the Oklahoma City Thunder? How you respond to that query basically dictates where your money is going.

If you need some further prodding about the NBA Finals, then keep reading.

HOW DO THEY MATCH UP? 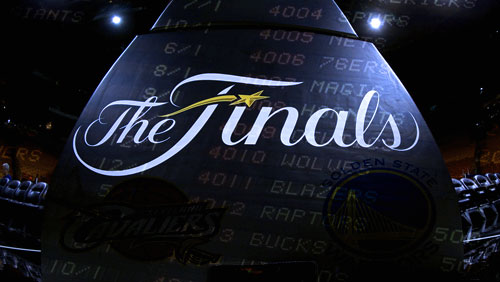 Truthfully, not very well. Golden State creates complete anarchy on the court that throws opposing defenses in to chaos. I just don’t see how you can go from Klay Thompson and Stephen Curry getting around a defensively staunch duo like Andre Roberson and Russell Westbrook to Kyrie Irving and Iman Shumpert (or J.R. Smith).

Irving was a menace in Game 1 of last year’s NBA Finals until his knee gave out on him, and he’s going to be the biggest x-factor in this series. His offensive capabilities are well known, but his defence is absolutely shameful. There’s no excuse for it. He has to become something more on that end of the floor in an instant.

Fortunately, Oklahoma City offered a semblance of a blueprint on how to handle Golden State.

What made the Thunder-Warriors series epic was fascinatingly multi-faceted. Oklahoma City reduced their rotation, essentially going with an eight-man group that was allowed to feel the rhythm of the game appropriately. They devoured rebounds on tip drills that were so methodically planned it made my jaw drop. Most importantly, they stacked the perimeter with big athletic bodies that made it harder for Golden State to get the shots they wanted.

Unfortunately, there doesn’t seem to be a limit to the range that Thompson and Curry possess. We’ve never seen a shooting duo like these two before. It’s categorically unstoppable, but you can at least make it more difficult for them when you have personnel capable of getting in front of them on the arc.

Suffice to say, Cleveland doesn’t. Their big guys are nowhere close to being as mobile as Serge Ibaka and Steven Adams, and LeBron James simply can’t cover everyone at the same time. He’s not 2007 Kevin Garnett.

The true counter for Golden State is the three-point shot. Oklahoma City wasn’t especially versed in long range shooting, and Cleveland isn’t that much better. There are more snipers on Cleveland than Oklahoma City, but it’s going to be tough for those guys to get open. Kevin Love can’t just happily park himself in the corner and bomb away. The Warriors won’t let him.

The intrinsic problem for Cleveland is that they don’t have a deep enough roster. The can’t afford to run Tristan Thompson and Kevin Love out there for long stretches because that frontcourt pairing is too slow to adjust for the speed of the passes that Golden State spins around. They eventually shift gears and use Iman Shumpert more often but in doing so they lose both an interior scoring presence on put-backs and a person who can rebound.

Defensively, Golden State adapts to what their opponents do over the course of a game like an over-aggressive artificial intelligence. When Durant and Westbrook started doing drive and kicks to players underneath, Golden State started clogging the area underneath the basket. Their zone coverage on the perimeter is exceptional.

Cleveland has molded itself all year as a Golden State doomsday device. That’s why they went out and traded for Frye. It’s one of the reasons they still employ J.R. Smith. They expect to counter Golden State’s defense with LeBron James as a pass-first wrecking ball. It won’t work. Kerr will see that from a mile away and make the necessary adjustments.

The short of it is that the pace set by the Warriors is unmatchable by the Cavaliers. They’ve tried to improve their own ball movement, but the passes have been hectic instead of crisp, haphazard as opposed to precise. The only way you challenge Golden State is by using a combination of driving players (like Irving and LeBron) along with exceptional passing.

I do believe that Cleveland can use their best two players to crack some of what Golden State does defensively. I’m just not as confident that Frye, Love and Smith can come up with the shots they need to keep the games close.

The one thing that Oklahoma City did well was rotate their offence towards whomever Curry was guarding. That works when you have five guys who can score. The Cavaliers don’t have that luxury.

In the end, keeping Tristan Thompson and a lackluster bench is going to haunt the Cavaliers, especially if they get in to foul trouble. This is a complete mismatch from a lot of angles.

And if you think LeBron is enough to turn the tides, then you probably need to be reminded as to why Andre Igoudala was the NBA Finals MVP last year.

The reason it’s impossible to bet against Golden State in this series is because they just feel blessed. This isn’t meant to belie the surreal talent of the roster, nor the unbelievable accuracy of Thompson and Curry. It’s just that when they need shots or stops, they always seem to find them. Great teams find a way.

In a more intangible way than I outlined above, Golden State simply feels like a team that doesn’t know how to lose. Plus, they’re exceptional at leaning on an opponent until they snap in half. That’s exactly what they did to Oklahoma City, in order to come back from the depths of the River Styx to overcome an otherwise impossible deficit.

One of the stories about Cleveland heading in to the playoffs was their mental fragility, and that’s still on the table. The Cavs have gotten away with playing awful teams for three rounds so far. Toronto was feisty, but not a real world-beater. Nobody was pretending like they were going to slay a dragon, let alone two.

So what happens when Golden State leans on Cleveland? You guessed it – snap.

You can talk me in to anything other than a sweep. I just think that the Love-Irving injection in to this series will matter for at least one win differential to the Cavaliers. My preference is Golden State in 6 games.

THE IMPORTANCE OF LEGACY

The overhanging word over the 2015-16 NBA Finals is “legacy”. Golden State just submitted the greatest regular season of all time, and can cement themselves as the best team ever with a championship win. Those are their stakes. It’s dead simple with them.

The case for Cleveland and LeBron James is much, much different. James will be entering his seventh NBA Finals, and his sixth consecutive championship series.  That’s complete lunacy. These are the results from his last appearances:

Overall, this is insanity. LeBron James getting to the NBA Finals seven times, including six seasons in a row, is legendary in itself. And the narrative on something like a player constantly getting to the threshold and losing usually takes an ugly turn. “Can’t get it done” and other bullshit hot takes usually prevail. The sentiment on James is positively different. Maybe we’re growing up as fans.

There are some caveats and pitfalls here. A record of just 13-20 SU in the NBA Finals yields a return of just 39.4%, which is a trend you would bet against stiffly with your own savings. You just don’t see numbers like that because nobody else accomplishes these types of feats. But the fact that those numbers exist around LeBron James should inform your decision.

It’s hard to look at James’ numbers in the NBA Finals without context, and I don’t have the room or the inclination to use this space to gut through each year with a microscope. There have been good years, great years and two really bad ones.

If you’re going to compare LeBron to anyone, you’re going to line him right up against Michael Jordan, the greatest player of all time who also went Montana-style in the NBA Finals. Part of Jordan’s legend is that he never ever faltered when the title was on the line. Hell, he never even let a series get to a Game 7.

By traditional comparison, Jordan averaged 33.6 points, 6.0 rebounds and 6.0 assists with his best NBA Finals against the helpless Phoenix Suns. Jordan put up an otherworldly 41.0 points, 8.5 rebounds and 6.3 assists in a six-game series. It’s hard to imagine anyone coming up with that many points per game in another NBA Finals.

This being said, LeBron is fresh off of a fairly straightforward season where his Cavaliers have only lost two games on the Eastern Conference side of the playoffs. There is no telling what the 31-year old superstar is capable of in the NBA Finals against the Golden State Warriors. None. He might be ready to unleash the war dogs with a team that plays more to his skill sets than any version of the Cavaliers have in the past. It could be another blowout. We literally have to wait and see.

As I said before, there seems to be a growing public understanding that reaching the NBA Finals for six consecutive seasons is an accomplishment in itself. We seem more capable as fans to appreciate what that means instead of looking at him and saying “haha, you’ve lost more games in the NBA Finals than any other great player”. I don’t necessarily understand why the vitriol that used to perpetuate against Peyton Manning in a similar context hasn’t dogged James.

Eventually, you’ve just got to win those rings. Nobody’s going to offer a free pass to Oklahoma City for running straight in to the Golden State Warriors, and even fewer should be as forgiving when a fully healthy Cleveland team surrounds LeBron James. Especially when he’s handcrafted this team to beat Golden State.

Is the phrase, “We lost to a better team” good enough when you’re LeBron James? We’ll find out over the next two weeks.