American based professional online poker players got a boost on Friday after Nevada Gov. Brian Sandoval told a Nevada Gaming Committee meeting that he was ‘ready to go’ with an implementation scheme to share online poker liquidity with his opposite numbers in Atlantic City.


Fully regulated and legal online poker in the United States of America got a boost on Friday after Nevada Gov. Brian Sandoval declared that he would be willing to sign a multi-state Internet agreement with New Jersey ‘immediately.’

The speech came as key people within the eSports and gambling industry convened in Nevada for the Nevada Gaming Policy Committee Meeting chaired by that man Sandoval. 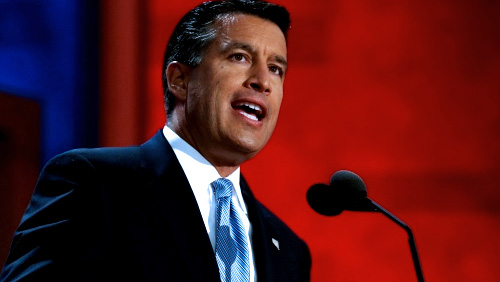 The main focus of the meeting was to try and build bridges between the eSports and Nevada gambling universes. The likes of Seth Schorr, CEO, Fifth Street Gaming, Craig Levine, CEO, Electronic Sports League, and Jake Fyee, General Manager of Echo Fox: an eSports team owned by former L.A. Lakers star Rick Fox were all in attendance.

Instead, the mushroom cloud of excitement that left the room concerned the passing of the buck from Sandoval to New Jersey Gov. Chris Christie in relation to sharing of online poker players. Nevada is the leading light of all things gambling in the U.S, except when it comes to the world of the Internet.

With April revenue numbers topping the $17m mark, New Jersey wear that crown. It’s a 33.8% increase year-on-year, largely thanks to PokerStars, who’s recent introduction into the Garden State online action has been like Leicester City signing Cristiano Ronaldo. Nevada haven’t had an online gambling revenue open book policy since Ultimate Poker went the way of the dinosaurs back in 2013.

Sandoval told the committee of his enthusiasm over the possibility of Nevada and New Jersey joining forces on this one. He even suggested the potential partnership would be like ‘putting together the Yankees and the Dodgers.’

So why are New Jersey dodging?

OnlinePokerReport scribe Joss Wood believes the problem may lie with Gov. Chris Christie’s relationship with online gambling’s arch enemy Sheldon Adelson. It’s obvious the pair have a back-scratching relationship and uniting the two states strengthens the power of online gambling in the country.

Sandoval also mentioned the potential of teaming up with California. Pennsylvania and Michigan are other ‘potentials’ for discussion further up the road. Nevada already has a Multi-State Internet Agreement (MSIGA) with Delaware. Whilst the numbers have not been earth shattering it has allowed The Nevada Gaming Commission (NGC) to gain a better understanding of the nuts and bolts of such an arrangement.