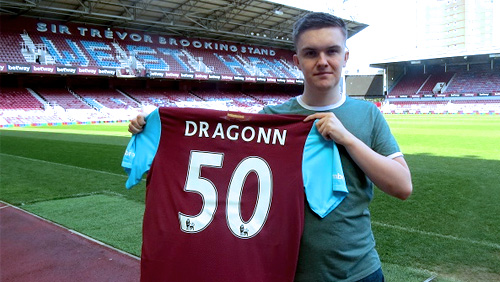 After Premier League side West Ham signs FIFA Interactive World Cup runner-up Sean “Dragonn” Allen to represent them in future eSports competitions, Lee Davy opines on how the two sports will have to work together in the future to find the games new fans.


As my son flew down the great gooey slide of life, I was waiting at the other end with a pair of football boots. There was only one problem. He wasn’t interested. My dreams of him becoming a professional footballer died a very early death.

A few years ago my son started to show an interest in the EA Sports franchise FIFA. His friends were playing the game online, and eager to ‘fit in’ he picked up the controller and learned that nutmeg wasn’t just spice that you put into rice pudding.

His involvement in FIFA soon escalated to the actual football pitch as his friends all played for teams on a Saturday morning. Although my dreams of seeing him become a professional footballer would never materialise given his age (14), it did give me an incredible opportunity to bond with him, particularly since I am divorced from his mother and no longer live with him.

He joined a local team and over the past two seasons I have helped coach them. There are some major differences between the way I got involved in the game and the kids of today. In my youth, you played football because it was the most cost effective spot of fun your parents could afford. You got into the game because a relative in your family supported a team (my uncle loved Man Utd) and you followed suit. You got better because all you did was play football outside of going to school and eating stuff you didn’t want to eat when your mum shouting, “dinner’s ready!”

In contrast, the kids of today don’t have much of an affinity for one particular team. It’s not like a religion to them. Instead, they adopt a love for individual players. They don’t even watch much football on TV, something that I think impinges upon their abilities, especially the knowledge of positional play. And rather incredibly, they seem to learn how to play football by playing FIFA online, and not through sticking the ball through goalposts made from jumpers.

If the world that I see mirrors others, then the fan base of football clubs around the world could have a potential problem on their hands. It’s not an immediate problem as the waiting times for season tickets at the world’s top clubs testify. However, it could prove to be a problem decades from now, as fewer and fewer children care, preferring instead to enjoy their football in the virtual sense (VR technology will play a huge role in this).

Professional clubs are now starting to recognise that their fans, or customers, call us what you like, digest their football through a very different vehicle these days. And they are acting.

In May 2015, German Bundesliga side VFL Wolfsburg very quietly signed Benedikt “Salzor” Saltzer and Daniel “Dani” Fink through the gaming agency Stark eSports. The pair were hired to represent the club at eSports competitions, and would wear their colours. In January of this year, there was slightly more noise, when the Germans signed their third eSports player: 22-year-old David “DaveBtw” Bytheway from the UK.

At the back end of last week, the Premier League got into the act when West Ham signed 24-year old Sean “Dragonn” Allen as their first eSports player. They even handed him an official squad number “50” and will wear the claret and blue when competing in competitive FIFA eSports competitions.

This season West Ham have amassed more Premier League points than ever before. At the time of writing, their Champions League qualification hopes have been dashed (they are sixth), but they still harbour hopes of competing in the Europa League.

On the player front, Dimitri Payet has been a revelation, scoring free kicks for fun, and making the shortlist for the Professional Footballer’s Association (PFA) Player of the Year award.

As West Ham progressed this season, so did the statistics of their players on FIFA’s piece de resistance: Ultimate Team, where FIFA players use points accrued via numerous options to purchase the best players in the game.

As the likes of Payet, Cheikhou Kouyate, Mark Noble, Manuel Lanzini, and Andy Carroll perform better each week, so their stats improve leading to their selection in people’s Ultimate Team. Before you know it youngsters are asking parents for a ticket to travel to the Olympic Stadium to watch, not West Ham, but the players who compete in those teams colours.

So this is why all the grown-ups reading the paper this morning and sniggering over the ridiculousness of this signing need to think again.

Karim Virani, head of digital marketing at West Ham, told the Belfast Telegraph: “eSports is one of the fastest-growing sports in the world, so we are delighted to have signed one of the world’s leading players to represent us.”

What West Ham, and Wolfsburg, have done before them is a trendsetter. More clubs will follow when they start to realise how their organisations connect to the fans of tomorrow.

And it all makes perfect sense.

One day we will see FIFA tournaments and leagues mirror their real world counterparts. We already have a FIFA Interactive World Cup. Allen finished runner-up after conceding two goals beyond the 88th minute (ouch!). It’s not beyond the realm of possibility that we have a FIFA Premier League campaign with stars like Allen representing all 20 Premier League clubs, and the same through Europe including a Champions League tournament.

So next time you take your kid down the park for a kick about and he says he wants to play CDM, don’t laugh at him. You never know, it won’t be that long before you are searching through Oddshark.com looking to place a bet on the next winners of the Premier League and all the money is being wagered on FIFA competitions.