Home / Business / A Brief History of Money and Bitcoin 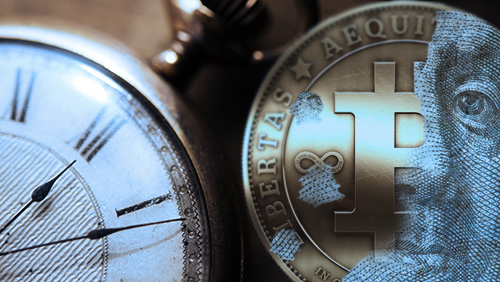 The progression of human history is essentially the story of the unending battle between power and liberty. The terms “good and evil” are often used when making these very broad strokes statements, but those terms breed disagreement and everyone sees them differently. Power vs liberty, on the other hand, is easily definable. Power is the ability to force people through violence or the threat of violence to do what they otherwise wouldn’t or vice versa. Liberty is the ability of people to do whatever they want without exercising power.

Human history progresses in jumps rather than gradually. It’s the crazy people who really run the world, pushing history forward in the sense of outsized contributions to humanity. When I say crazy I mean people like Da Vinci, Volta, Tesla, Faraday, Edison, Einstein, Jobs, all people who were so insanely productive that it boggles the mind how they accomplished what they accomplished and still had time to sleep. When history takes a real great leap forward due to the genius of the few, living standards improve. The quality of life gets better for everyone.

And then power comes in and tries to tax it and regulate it and take as much of the pie as it can for itself so it can spend it trying to conquer other governments by destroying capital and savings anywhere on the planet. This battle between power and liberty will continue indefinitely until human history ends, so whatever great innovations have been made by the latest genius who has pushed human history forward, power will make its attempt to tax it and regulate it and control it in order to fund more conquering.

Yesterday, Australian professor Dr. Craig Wright confirmed to the world that he is the inventor of bitcoin. Like most geniuses, it is an open question whether he has any time to sleep. At 45, he holds two PhDs and eight Masters Degrees, is studying for a ninth in finance, all while inventing the world’s first and most successful cryptocurrency and holding who knows how many jobs over the years. Not surprisingly, immediately after revealing himself, Power in the form of the Aussie government came and raided his home in a “tax investigation”.

Money itself is the most important human invention ever conceived. Only with money can we have a division of labor, and only through the division of labor can people survive at all. I can write, trade that for money, and use the money to buy food. Without money we would be reduced to barter and most of the human race would perish. Good luck trading your specific skill set directly for food, clothing and shelter. Almost nobody would trade my writing for food directly. I would starve.

Money arose organically from a market need, most people using a combination of gold and silver for convenience. People would bring the gold and silver they mined to a local coiner who would stamp each coin with a weight so people knew how much it was worth in terms of goods. Private coin minters got fees for their services, the going market interest rate on money. They’d keep a percentage, and that’s how they were paid. The most honest minters would get the most business for having the most honest money, and in that way dishonest counterfeit money, as in copper instead of gold or silver coin, was kept to a minimum.

Then Power saw the new invention, and in the form of governments demanded a monopoly on the coinage business. The king demanded his face on each coin, and only he could mint them. So the king started mixing copper into the coins and kept the remaining gold and silver brought to him for himself to spend on wars and conquering and destroying capital. Inflation – inflating the money supply by mixing with cheaper metal – became the norm instead of the exception. This again slowed down human progress significantly.

In more modern times with the advent of paper receipts for gold traded to lighten the burden of carrying the stuff, governments demanded a monopoly on gold receipt printing, the Federal Reserve for all intents and purposes. (They don’t do the printing, but they order it.) Anyone else caught printing receipts would be thrown in prison. Then Power finally stopped paying anyone any gold for any receipts at all, because they spent it all on wars. The government came up with a nice Orwellian term for it called “Closing the gold window” as in “President Nixon closed the gold window.” From now on people would just pass around the paper, and only Power may print it, including printing for itself to spend on whatever it wants. Welfare and warfare mainly.

But the government deficit still just got too high. Raising tax rates, however, is politically dangerous. So the newest move is to ban cash and keep everything electronic so Power can track every single transaction you ever make and tax every single one. That way they can collect more taxes without raising tax rates, and spend even more on more welfare and warfare. All on the pretext of stopping “criminals” from selling marijuana or trying to evade taxes.

And hence the need for bitcoin. It arose out of a market need for a money that was untraceable and outside the government monopoly system. Governments are already trying to infiltrate the blockchain and regulate it and track it, and we have yet to see if they will succeed. But they will try.

Since bottoming in early 2015 around $200, bitcoin is up 125% in dollar terms.  The parabolic rise in the price of bitcoin in October/November 2013 from $127 to nearly $1,200 was the unfortunate effect of two things. First, the public suddenly discovering its existence and badly wanting a money free of the influence of Power. Second, the fact that in 2013 bitcoin was still not widely used, and therefore it was lacking in liquidity. The crash afterwards was not surprising.

As for the future of bitcoin, the general trend will be up because more people are using it and more dollars are being printed. The chart below from Blockchain.info shows daily bitcoin transactions in 2015, and that number will keep rising in a positive feedback loop. The more people that use it, the more merchants will accept it, the more liquidity it will have, the more people will use it.

A second reason that bitcoin liquidity will increase is that it can now be used as an intermediary for things like currency exchange. Apps like Circle enable users to buy bitcoin in, say, Euros and immediately sell it in dollars without the bank fees. This is crucial because it gives bitcoin a use for those who would not ordinarily use it to buy goods and services directly.

Since the supply of bitcoin cannot be increased and the supply of dollars will always increase until the dollar dies, then it is smart to have at least some of your government cash holdings in bitcoin. The dangers to bitcoin are two. The first is technical, something like an electromagnetic pulse or virus that destroys or steals bitcoins, if that is even possible. The second is, again, Power. The more we hear about government partnering with bitcoin entrepreneurs, the more we should fear, precisely because the aspect that makes it independent from government – the blockchain – can theoretically be used by government to track every single bitcoin transaction if they could but see it.

The real explosion in the price of bitcoin will be concurrent with the explosion in the price of gold, which will happen when interest payments on government debt, paid for with government monopoly money (pun intended), exceed the ability of government to tax the difference. At that point the price of bitcoin and gold, and all commodities really, will skyrocket, and the real attempt by Power to infiltrate the blockchain and co-opt bitcoin will begin. When power encroachment really threatens though, liberty will fight back again, and new cryptocurrencies with stronger defenses against government infiltration will be developed. It will be an epic battle of power vs liberty once again, this time centered on money, the most important invention by liberty in human history.