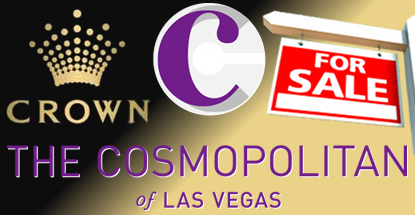 Australian casino operator Crown Resorts Ltd. is looking to acquire the Cosmopolitan of Las Vegas, which would mark the company’s return to a US casino market that has historically not been kind to Crown. The Australian Financial Review broke the news that James Packer’s company would lodge an expression of interest in the Cosmopolitan, which is currently up for sale by owners Deutsche Bank, who are believed to be seeking between $1.5b and $2b for the 3k-room facility.

The $4b Cosmopolitan, which opened in late 2010, has lost nearly $300m in its first three years of operation. Deutsche Bank assumed control of the property in 2008 after the original developers couldn’t meet their loan obligations and the Germans are reportedly eager to clear the red ink off their books. There are believed to be four potential bidders kicking the Cosmo’s tires but Deutsche Bank wasn’t commenting Monday regarding the AFR’s reports.

In September, rumors surfaced that Packer was chasing the Cosmopolitan but Cosmo officials immediately labeled the reports “false.” Crown’s previous attempts to crack the US market have been disastrous, with Crown still embroiled in litigation over its failed $2.9b Fontainebleau Las Vegas project, which collapsed in the wake of the 2008 global financial meltdown. The financial pinch also scuttled Crown’s bid to acquire Nevada-based Cannery Casino Resorts for $1.75b, with Crown ultimately paying $320m for the privilege of not having to go through with the deal.

Crown’s latest US ambitions could impact some of its other prospective casino projects. Crown is in the final stages of garnering approval for its VIP-focused casino in Sydney as well as its plans to build a casino in Sri Lanka’s capital Colombo. Crown is also eyeing potential mega-buck projects in Japan and other Asian jurisdictions, whether on its own or with its Melco Crown Entertainment joint venture. Should Crown’s bid to acquire the Cosmopolitan prove successful, speculation is that Crown would have to forego some of its other ambitions, such as its pursuit of another domestic casino in Queensland, which would be welcome news to the ears of rival operator Echo Entertainment.