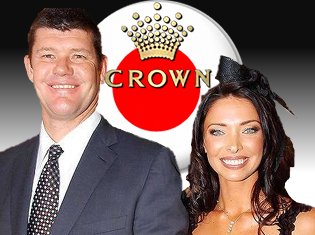 James Packer, boss of Australian casino operator Crown Ltd. (soon to be Crown Resorts Ltd.), has announced the separation from his wife of six years, Erica Baxter. (As proof that it is indeed a small world after all, Baxter used to date actor Russell Crowe, part-owner of the National Rugby League’s South Sydney Rabbitohs, with whom Crown inked a three-year jersey sponsorship in May.)

While Packer’s marital split is said to be amicable, there’s the not insignificant matter of how much of Packer’s $6b fortune Baxter will receive via a divorce settlement. Amicable or not, Baxter timed her exit well, as Crown shares closed out Friday’s trading at an even A$15, up over 62% from A$9.20 on Sept. 6, 2012, increasing Crown’s total value by over $4.5b in just 12 months. Packer increased his stake in Crown to 50.1% in December.

News of the split comes the day after a rumor spread that Packer had agreed to pay $3b to purchase the struggling Cosmopolitan casino in Las Vegas. The rumor was quickly quashed by Cosmo officials, who stated simply that the report was “false.” Farfetched might have been a better way of describing the notion that Packer would seek a return to Vegas, given his disastrous experience with the aborted Fontainbebleau project, over which Packer has been sued by irate investors who accused Packer/Crown of hiding cost overruns on the failed $2.9b venture. In May, Packer failed to convince the Nevada Supreme Court to have his and Crown’s names removed from the suit.

Packer and Crown do have a serious interest in expanding their operations to Japan, a country Packer says is full of “mad gamblers.” After interminable delays, Japan looks like it’s finally getting serious about passing casino legislation before the year is out, and mayors of the country’s largest cities are already furiously jockeying to ensure their jurisdictions get to host one of the new gaming joints.

This week, a 15-member delegation of Osaka’s politicians and civic officials descended on Crown Melbourne on a fact-finding mission. To underscore the importance of Japan to Crown’s expansion plans, the delegation – which included Osaka’s vice-mayor, the president of the city council and the director-general of the Economic Strategy Bureau – was personally escorted around the property by Crown CEO Rowen Craigie, according to a report in The Australian.