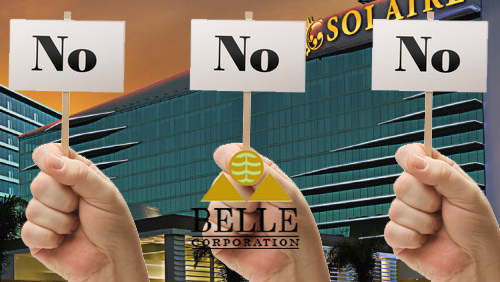 The group behind City of Dreams Manila, is up in arms after learning that one of its rivals is planning on opening a casino outside the Philippine Amusement and Gaming Corporation’s (Pagcor) Entertainment City complex.

Belle Corporation vice chair Willy Ocier told reporters on Monday that state regulator Pagcor should dissuade owners of gaming licenses from putting up casinos in areas other than Entertainment City, where massive sums of money have already been invested into.

The Belle executive was reacting to news that Enrique Razon Jr., owner of Bloomberry Resorts Corp., will start building his second casino project in Quezon City next year. Razon owns Solaire Resort and Casino, which is located near Belle’s City of Dreams Manila in Entertainment City.

Razon, who recently warned Manila’s casino development has become a case of “too many, too fast,” said his company plans to build a “mixed-use development with a hotel and casino” much like Solaire on a 1.5 hectare property in the Quezon City Central Business District, located about 23 kilometers away from Entertainment City.

Ocier pointed out that “if the government allows smaller casinos, here, there, everywhere, it defeats the purpose of why we are here, an integrated casino.” Belle, along with its partner Melco Crown Entertainment, has already spent $1 billion in City of Dreams Manila, according to the executive.

Instead of letting operators build casinos wherever they want, Ocier said Pagcor should “direct all traffic to Entertainment City,” where “the infrastructure is concentrated.”

Ocier was quoted by the Philippine Daily Inquirer saying: “I don’t mind competing in that environment where casinos are together. People will jump from one casino to another.”

Manila already has three integrated resorts in full operation—Resorts World Manila, Solaire, and Melco Crown Entertainment’s City of Dreams Manila—and two more are scheduled to open soon. Kazuo Okada’s Manila Bay Resorts will start operating by the end of the year, to be followed by Resorts World Bayshore in 2018.

Industry analyst Grant Govertsen, however, believes that opening a casino in an area without an existing gaming establishment “makes a lot of sense.”

“Bloomberry’s Quezon project being developed in an area even further from the airport, the entire focus of this project should be mass market locals. This, along with a smaller footprint, and a less complicated building process, argues for a much lower development cost on a per-square-foot basis,” Govertsen said in a note.