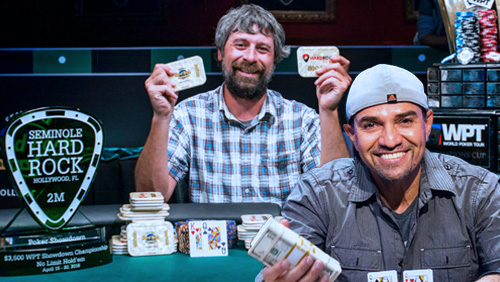 3-Barrels of pure World Poker Tour value as Mike Shariati is confirmed as their Player of the Year; Justin Young wins the Seminole Hard Rock Poker Showdown, and Adda52.com start sending players to the WPT500 at Dusk Till Dawn.

Three tales from the land of the World Poker Tour (WPT) starting with the news that Justin Young has won the WPT Seminole Hard Rock Poker Showdown in Florida.

Young joins a talented bunch of former winners including Taylor von Kriegenberg, Tommy Vedes, Kevin Eyster, Eric Afriat, and Griffin Paul. The $3,500 buy-in event attracted 1,222 players (down on last year’s figures of 1,476), and Young picked up $669,161 for the win.

Heading into the final table, and all eyes were on Cate Hall. In amongst those eyeballs were people hoping to see the first female winner of a WPT Main Event, but that was a side story. If Hall could finish third or better, then she would be overtake Mike Shariati as WPT Player of the Year.

Hall had previously cashed six times in WPT events this season, making two final tables, finishing fifth at WPT Maryland, and fifth at the WPT Five Diamond Poker Classic. She had to wade into deeper waters if she was going to capture the crown won by the likes of Daniel Negreanu, Bertrand ‘ElkY’ Grospellier, and Anthony Zinno, but it didn’t happen, after she crashed in ninth place for $65,404.

Young ultimately beat Garrett Greer heads-up to take the title after overcoming a chip deficit of 14.2m v 22.4m. Two pivotal hands decided things. First, Young came from behind to hit an ace: A9 v 44, and in the final hand of the tournament, Young was all-in KQ v A8; Greer flopped an ace, but Young flopped a king, and rivered a queen to wrap up the competition.

It was a valiant attempt by Cate Hall to try and wrest the WPT POY title away from Mike Shariati, but he clung on to earn the accolades, a customer made Hublot watch, and hotel accommodation and travel expenses for every WPT event he competes in next season.

Hall had a 50% better cash rate than Shariati. However, he amassed more points thanks to his victory at the WPT Legends of Poker and runner-up spot in the WPT LA Poker Classic. All told Shariati earned over $1.3m during his run. His three cashes were the only WPT Main Event cashes in his career.

WPT Player of the Year History

Adda52.com Plan to Send Online Qualifiers to the UK

The partnership between the WPT and India’s largest online poker network Adda52.com is already starting to bear fruit after they announced plans to send online qualifiers to the UK.

The first promotion by Adda52.com will afford the opportunity for their players to qualify for the WPT500 at Dusk Till Dawn (DTD), Nottingham, England. Online satellites began 19 April, and players can qualify for as little as $5.

The WPT500 starts 19 May and carries a $1m Guarantee. Adda52.com will also be sending their official Team Pro stable consisting of Amit Jain, Kunal Patni, and Madan Kumar.