Home / Sports / NBA – What’s The Best Team To Bet On To Win The Western Conference? 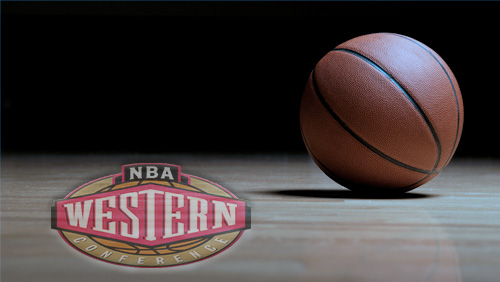 Let’s just jump right in to it. Unlike an Eastern Conference that is ruled over by one team and just one potential upstart, the west is a mine field of explosive potential. The Warriors feel like the automatic bet to win the Western Conference, especially given their odds, but there’s an x-factor here that people don’t really want to talk about. Hell, I don’t even want to mention it.

The reasons to bet on Golden State are pretty simply. They have the best player in the league, they’re the defending champions and they just ripped off a 73-win season that will keep them in contention as one of the best teams of all time.

The reason to bet against Golden State winning the conference and the championship is two-fold. Either you think San Antonio can beat them in a seven game series…or you’re betting on someone essential getting hurt. I never like talking about sports (or people) in this light, but as a gambler you have to face reality.

That 73-win season took an enormous toll on this team from all angles. Emotionally, physically and mentally this team has given it all for a full season. There were no off nights. Most NBA logic suggests that a team can’t have it all. Something has to give when you press that hard for that long.

To their credit, Golden State has done a miraculous job of avoiding injuries over the past two years. Their training staff is amazing in this regard. But if something does happen – and I’m not hoping that anything will – then it’s worth spreading some chips around the lesser teams in the conference.

Karma looms here. That’s all I’m saying. Watching the Warriors can feel like betting on red or black at the roulette table. At some point, the ball has to bounce the other way and if something catastrophic happens then the tables get flipped violently.

More positively, you can also make strong arguments that San Antonio can just beat them straight up. But for any other team to have a hope of dethroning Golden State, then any one of their starters has to go down with a playoff-ending injury.

There are almost no teams in the west that can actually go toe-to-toe with the Warriors like the San Antonio Spurs. They’re built for it. One of the best reasons to bet on San Antonio to get to the Finals (or win the whole thing) is that you don’t have to count on a Golden State injury to retain value here. If you’re reading this, you’re probably in to basketball so I don’t have to spend a lot of time waxing poetic about the brilliance of Gregg Popovich. The Spurs are awesome. You already knew that.

Forget the history of Oklahoma City. Forget the Harden trade. Forget the injuries to Westbrook and Durant. Forget the wasted years with Scott Brooks as the coach. Forget it all.

The 2016 Oklahoma City Thunder are at their absolute peak. It’s true that team basketball is enjoying a renaissance with franchises like the Spurs, Celtics, Raptors and Warriors embracing the way this game was supposed to be played. But there’s got to be something said about a franchise properly molding a supporting cast around two of the best hostile takeover artists in the league.

Kevin Durant and Russell Westbrook form my absolute favorite duo. I don’t want them to break up. They’re perfect for each other, and with both enjoying a healthy season they’ve forged the second best offense in terms of output (110.2 per game) and efficiency (109.9 per hundred possessions). You can guess who they trail.

The team has also managed to build around their star players well with the introduction of Steven Adams, Andre Roberson and Enes Kanter along with the unusually useful Kyle Singler. Where this team falls short is on the defensive end, but they make up for that shortcoming with an astoundingly high rebound rate. They grab 54.7% of available boards, the highest mark from this season. That’s how you create a perfect supporting cast for high volume scorers like Durant and Westbrook.

At 8/1 I love this team to breakthrough. I can’t stress that enough. There’s a huge, nerdy part of me that completely endorses what San Antonio and Golden State do. However, the fanboy in me is marking out hard for the Thunder. Rarely do transcendent players pair so well together, and if this is the last playoff run we see these two make, I want it to be one to remember. I have enough faith in their ability both as players, and within the team, to leverage a sizeable play on these odds.

You know how I just asked you to forget everything you know about Oklahoma City’s somewhat moribund playoff history? Don’t do that with Los Angeles. This team has always played entitled; as if they deserve to be NBA Champions. You have to have that chip on your shoulder to some extent but this is the post season. Everything is earned and nothing is given.

Los Angeles won’t have problems with Portland, but the second round could pose serious problems for them if they end up against Golden State (which I know is stating the obvious). The Clippers have always been on the precipice of something great given their uber talented core, but they’re never been able to get over the hump.

That’s why there’s been constant talk about trading Blake Griffin. Trust me, when the Clippers realize that their current assembly isn’t good enough to win a championship regardless of how good San Antonio and Golden State are, they’re going to blow this thing up. And yes, this is me basically predicting that Boston ships them a monster load of picks for Griffin on draft night.

Portland has done something remarkable in the wake of LaMarcus Aldridge’s departure, but they’re still not there yet. Damian Lillard and C.J. McCollum will be one of the better backcourts in the NBA for years to come. All the other pieces – like Ed Davis, Brian Roberts, Al-Farouq Aminu and Maurice Harkless – are great too. But they’re still one, major impact player away from being a force in the playoffs. Lillard is good for one win in a series, but they’re not getting past the Clippers.

Coaching matters in this league. Rick Carlisle is one of the best. The problem is that talent also matters, and for all the incredible things that Carlisle has accomplished with this makeshift roster, there’s no way Dallas can game-plan their way to a conference title. They’re much better in an environment when they can play chess against a methodical opponent that will fall in to their traps. Against an opponent like Oklahoma City, which turns games in to track meets, they simply don’t stand a chance.

Of course, I’m ecstatic to watch the battle between Dirk Nowitzki and Kevin Durant because they are so similar in so many ways. If anyone resembles the unique qualities of Dirk, it’s Durant.

No Gasol, no thank you. You have to hand it to the Grizzlies for grinding out the remaining half of the season without their best player and only point guard. With too many injuries and a rotation that counts on guys like Lance Stephenson and Vince Carter logging 23+ minutes, it’s very hard to envision Memphis preventing a sweep. Their odds to win the conference championship are the worst for a reason.

At the onset of the NBA season, the Rockets were one of the big sleepers to steal this conference but a year of downtrodden disappoint has haunted this club. It’s very easy to throw shade at the Houston Rockets, but all the parts that made them a darling threat in the playoffs last year are back. The only difference is they don’t have the hard nosed Kevin McHale at coach.

One of the elements about winning in the playoffs is defense, and if you’ve been on the internet at all this year then you know that Houston can be absolutely laughable when it comes to stopping opponents. They rank 23rd in defensive efficiency and allowed a whopping 106.4 points against, just 0.1 points fewer than they scored on average.

The thing is that Houston is a team that can play stifling defense when they want to. They have a lot of length and can fill up passing lanes, disrupting offenses out of nowhere. Houston is a much more dangerous team than people assume, especially given that their offense scored the 4th most points of any team in the league.

The oddsmakers are giving them more respect than they probably deserve, but that’s how scary this team can be when it plays at its ceiling. A three game burst that saw them go undefeated against the spread to end the season should invigorate some people looking for an outside play. I’d much rather throw a chipshot at them to upset the Warriors in the series pricing, because I’m not sure if Houston has the mental acuity to play to their fullest potential for 12 wins in the post season.