Home / Business / Will the real Amaya CEO please stand up? 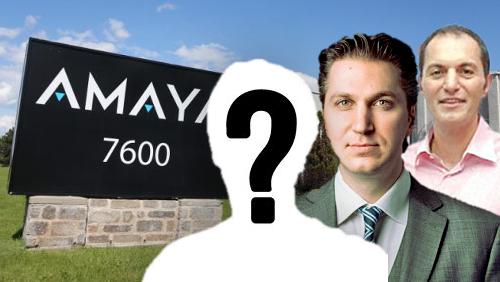 Canadian media sources continue to turn up the heat on Amaya Gaming CEO David Baazov, painting him as the primary culprit at the heart of the insider trading allegations rocking the online gambling operator.

As reported earlier, Baazov stands accused of funneling insider info regarding transactions with Amaya and six other companies to his older brother Josh/Ofer Baazov (pictured, in pink), who in turn passed the info on to his former bookmaking partner Craig Levett, who used the info to make stock trades that netted Levett and a dozen accomplices an estimated $1.5m in ill-gotten profits.

David Baazov has vehemently protested his innocence, and without seeing the full AMF evidence, his protestations seem grounded in reason. After all, David is Amaya’s single largest shareholder and his holdings dwarf the sum allegedly gained via the illegal trades, so why would he risk so much to gain so little?

It’s possible that David blithely assumed that any conversations he may have had with his older brother regarding Amaya’s business dealings would go no further, a scenario that makes David look spectacularly naïve.

As damning as that scenario might appear, it would be preferable to the alternative, namely, that David was aware of his brother’s activities, yet continued to reveal confidential info regardless. Which leads us back to the original question, why would he risk so much for so comparatively little?

WHO’S THE BOSS
The search for an answer to that question opens up the tantalizing proposition that Josh is the Baazov who is actually controlling Amaya.

This may not be as far-fetched as it may first appear. Unlike David, Josh had an online gambling pedigree prior to Amaya’s formation. Josh, along with Levett, controlled notorious slow/no-pay US-facing online sportsbook BetonUSA before the pair reportedly sold out following the 2006 passage of the UIGEA.

Josh and Levett were subsequently linked with Oddsmaker.com (now Oddsmaker.ag), a different slow/no-pay US-facing sportsbook that sprung up post-UIGEA, although Levett has denied having anything to do with the company.

Josh’s LinkedIn page lists his role as an executive at Baalev Investments – BAAzov/LEVett – a Quebec company Levett founded in 2007. Baalev’s Saint-Laurent offices were raided by AMF officers last week following the cease-trading orders filed against Levett, Josh and 11 other individuals.

Levett also founded the numbered company that underwent several name changes before it became Amaya. Levett’s name was stricken from the company’s shareholder list by May 2007, shortly after the sale of BetonUSA and the launch of Oddsmaker.com, which would make sense for a new gambling company not wishing to be seen as wilfully violating US law.

Last year, a report by Canada’s Globe & Mail newspaper detailed numerous instances in which Josh claimed to be representing Amaya in discussions with business figures as well as international government officials. One businessman claimed Josh had detailed plans to work with David on an online gambling venture prior to Amaya going public in 2010.

Josh and Levett have also shown up at Amaya functions, including the 2012 launch of an Amaya-powered gambling business in the Dominican Republic. Amaya spokespeople have denied that Josh and Levett were acting as Amaya reps in their southern excursions, claiming that Josh’s Chile visit was in the capacity of a “third-party company” utilizing Amaya technology.

There are plenty of reasons why Amaya wouldn’t want to be associated with Josh’s name, including his 1995 conviction for cocaine possession in Quebec. Two years later, a US federal court ordered Josh to pay $777k in damages to victims of a phony prize promotion telemarketing scheme following a Federal Trade Commission crackdown. To date, not a cent of this judgment has reportedly been paid.

When the Globe & Mail published its article last year, an Amaya spokesperson claimed that to the best of the company’s knowledge, Josh Baazov “is not, and never has been, an Amaya shareholder.” The AMF evidence seems to confirm that party line, with Josh appearing to profit primarily via kickbacks from Levett for passing on info supplied by David for still unfathomable reasons.

Before we get too far down the rabbit hole, we acknowledge that there is no hard evidence that Josh is pulling Amaya’s strings. But it would definitely explain a lot.