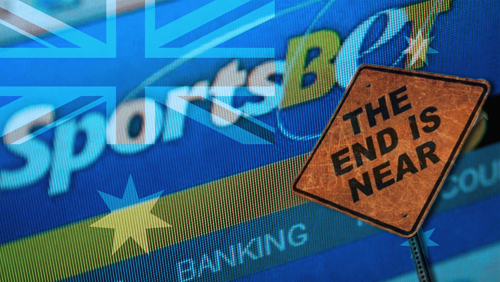 Online sports betting operator Sportsbet is seeking an end to the barrage of gambling advertisement in Australia.

A Nielsen AdEx report showed that Australian gambling companies spent $147 million on advertising in 2015, becoming the country’s fourth biggest industry in terms of advertising spending. The figure represents a 326 percent spike since 2012, when Aussie betting and gambling operators spent a mere $45 million to pimp their wares.

In an interview with The Australian, the executive said Sportsbet wants to work with the government “to strike an appropriate balance between legitimate community concerns about advertising, such as whether wagering advertising is appropriate in certain public areas or on sporting team merchandise, while enabling wagering companies to advertise their service.”

The 2015 ad spending figure was actually a drop from 2014’s high-water mark of $149.9 million, a result of Tom Waterhouse’s reduced role after his site was acquired and absorbed by William Hill.

In addition, Barry also wants an “industry-wide self-exclusion program” for players who might want to block themselves from the gambling sites, according to the report.

Sportsbet joins other operators, including Tabcorp, Tatts Group and Crownbet, who have also called for huge cuts in the betting ad blitz, a self-exclusion system and a national regulation of regulation gambling.

The 2001 Interactive Gambling Act (IGA) restricts in-play bets to over the phone or in person at betting shops, but many operators have come up with technological workarounds that allow in-play wagers via mobile apps.

Among those operators is Sportsbet. The operator recently offered a product that involves a phone call over a public switched telephone network, which it claimed makes the app legally compliant.

Last year, the government tasked former NSW premier Barry O’Farrell with reviewing the IGA. O’Farrell has already delivered his report to the government, and its findings were expected to be made public any time soon.

A revamped IGA would pave the way for a legalized online in-play sports betting, but Barry told The Australian a national gambling regulator—preferably, a British-style regulator—is needed to police the industry.