Daniel Negreanu is willing to pay $100,000 to see the size of Donald Trump’s penis, and Samantha Rea fails to see the appeal of her vagina becoming a water cannon. 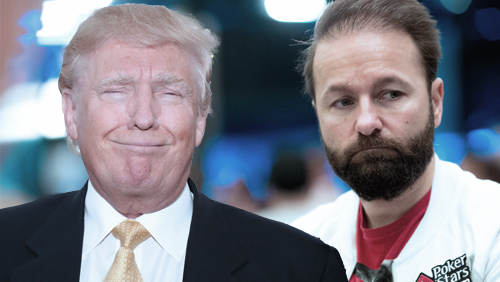 What would you focus on if you were running for President and your every word went whizzing around the world like a whirlwind?

Marco Rubio focuses on the contents of Donald Trump’s underpants.

During a rally at Roanoke, Virginia, Rubio decided the world needed to know the size of the ‘whole package’ should they choose to put Trump in office declaring Trump was:

“Always calling me little Marco. And I’ll admit, he’s taller than me. He’s, like, 6’2″ — which is why I don’t understand why his hands are the size of someone who’s 5’2″. Have you seen his hands? And you know what they say about men with small hands…You can’t trust them!”

Trump had the opportunity to respond to Rubio’s ‘little hands’ comments when he took part in Thursday’s Republican presidential debate on Fox News.

“He hit my hands.” Said Trump. “Nobody has ever hit my hands — I’ve never heard of this. But look at those hands — are they small hands?” Before moving on to the gold, “If they’re small, something else must be small. I guarantee you there’s no problem. I guarantee.”

So that puts that to bed then?

Some people want evidence that the man Vanity Fair’s Graydon Carter one called the ‘short-fingered vulgarian’ does, in fact, have a decent size weapon in his underpants holster, and that includes Daniel Negreanu.

I challenge @realDonaldTrump to release a dick pic to prove its of average size or more. I will donate $100,000 to a charity of his choice.

@RealKidPoker @realDonaldTrump how much more would you donate if you were told the carpet matched the toupee — shaun deeb (@shaundeeb) March 4, 2016

God forbid if Bill Perkins and Dan Bilzerian get involved.

Those who think it’s vulgar of me to write about the size of a man’s dick can rest easy as I am about to move onto the more civil discussion on vaginas.

I am always telling people who love their poker that they have to experience the World Series of Poker. Freelance journalist Samantha Rea did that very thing when she worked as a live reporter for the WSOP in the summer.

Not everyone’s experience is the same.

Rea recently wrote a piece for The Independent entitled: ‘From Being Mistaken for a Waitress to Being Told an Interviewee Could ‘Make me Squirt’, My Life as a Female Reporter,’ where she talks about a topic that doesn’t get enough attention as it should.

Yes, as Rea prepared to conduct an interview he told her:

Rea wrote, ‘I failed to see the appeal of my vagina as a water cannon,’ and when learning that the water gusher lover was some sort of sex svengali stated, “I’m happiest in missionary; I just wanted to get my quotes and go.”

Rea also wrote that during her coverage of the Seniors and Super Seniors events, at the WSOP, players kept mistaking her for a waitress.

“I was asked numerous times if I was taking orders.”

It’s ok Sam; the same thing happens to me all the time – the waitress thing naturally.

You can read her lively little report here.