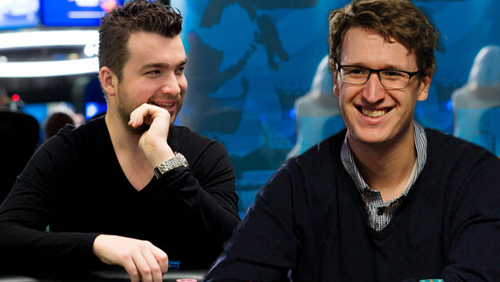 Online poker legend Chris Moorman wins the weekend 888 Sunday major to take him over $13m in online tournament winnings, and fellow Brit Max Silver gets into the app making business with SnapShove.

When we destroy our planet and follow Elon Musk to Mars our children will read about the history of a card game called poker, and there will be a name heralded as a true legend.

This past weekend, Moorman topped a field of 777 entrants to win the 888 Sunday Challenge for $18,809. The victory means he has now won more than $13 million playing online tournaments – $4m more than P0cket00 sitting in second place in all-time winnings.

It’s a phenomenal show of consistency in a game that becomes ever increasingly more difficult to beat. Moorman has won the PocketFives Triple Crown an incredible 25 times. When Terrence Chan and Adam Schwartz created the Internet Poker Wall of Fame (IPWOF) the mug of Chris Moorman was the fourth one nailed into the cement.

PocketFives has ranked Chris Moorman world number one an extraordinary 22 times. He won their yearly leaderboard in 2008 & 2009. Few players flourish both online and live, but Moorman does making him a must have pick when the Global Poker League (GPL) Draft kicks off Feb 25.

Moorman told PokerNews that he has registered and will be in Los Angeles hoping to get picked. At present, Moorman is playing Day 1B of the European Poker Tour (EPT) Main Event in Dublin.

Hit $13 million in online cashes tonight after taking down the @888poker $100k guaranteed. Best get some sleep b4 the EPT in a few hours…

Max Silver Gets Into the App Making Business

In 2011, Chris Moorman came close to winning the World Series of Poker Europe (WSOPE) Main Event in Cannes before losing heads-up to Elio Fox. It was a final table bristling with quality, and a certain Max Silver finished in 8th place sandwiched between Patrik Antonius (9th) and Jake Cody (8th).

Silver hit the news over the weekend when he released a mobile app designed to use ChipEV Nash Equilibrium when determining correct shoving ranges. Dominik Nitsche is amongst the players who have helped test the app called SnapShove.

The app is available on Android and iOS platforms. You can download the free version, or pay $9.99 for the pro version. While it’s great to see a professional poker player using their noggin to get a second stream of income going, the decision to create such a powerful tool will divide opinion within the poker community.

Do apps like SnapShove improve or damage our ecosystem?