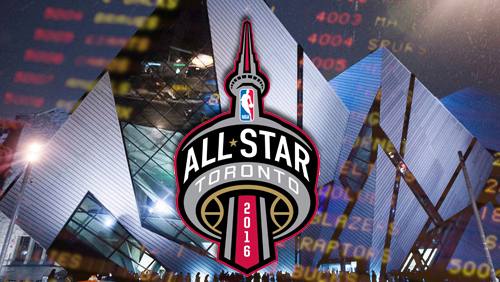 The NBA All-Star Weekend betting fiasco is as much of a coin toss as there is. It’s hard to take a mid-season romp that seriously when the All Star game features zero defense, and the Slam Dunk competition has become a sideshow more than anything else. Even with this coveted and cherished American tradition falling in to the gutter, there’s still earning opportunity, which is why I’m brining you my favorite choices to clear out All-Star weekend.

ALL-STAR GAME – SCREW THE SPREAD, BET THE OVER

The spread in these games is usually a weird, randomized number the bookies pull out of a hat (they don’t actually, I’m sure there’s some math to it). But betting on it is a haphazard exercise for the damned. There’s a much safer place to park your money.

If you’re not betting the OVER in the All-Star Game and then kicking up your shoes, I don’t know what to tell you. The average total for the last ten All-Star games has been 282.80 points. Three of the last four years have exceeded totals of 300.0. There’s no way in hell that the odds makers have the balls to put a total up in that stratosphere. Even if the game is less of a rampage than it has been in recent years, you can at least go down knowing you made the best NBA All Star Weekend betting pick you possibly could.

If you’re really going to gun for the spread or the moneyline, then the Western Conference is the take. They’ve gone 5-2 SU in the last 7 All-Star games and own the balance of talent on the court as well.

Check the line over the weekend to ensure it’s not too crazy, but with the piling injuries out east, the West in the OVER is your best double up for a weekend kicker.

The conspiracy nut in me thinks that Kobe Bryant is going to get the all-time record for MVP with his fifth in a row as he bows out this season, but that’s probably really dumb. Conspiracies are dumb. This isn’t happening, right?

If we’re following the logical trends instead, point guards have taken this trophy home with them in the last three. Chris Paul, Kyrie Irving and Russell Westbrook were all deserving candidates that took over the game. This line of thinking points us in a singular direction.

The sentimental vote for NBA All Star Weekend betting would obviously be Kyle Lowry, the star of the hosting Toronto Raptors. However, Lowry’s comfort at home isn’t a guaranteed fit for the win. The last two homebound winners of the NBA All Star Game MVP were Shaquille O’Neal in 2004 and Kobe Bryant in 2011. I’m a huge fan of Lowry’s gutsy game, but the All Star environment isn’t something that’s conducive to his ultra-competitive style. Of course, we said the same thing about Westbrook last year.

Flat out I believe that the Western Conference is better suited for a win. And really there’s only one player to bank on here.

The reigning MVP, defending world champion and Three-Point Contest champion is making this year all about him. His game is perfectly suited for the All Star matchup where nobody plays defense. He’s putting up 29.9 points in the regular season so far. Imagine what he’s capable of when the opposition isn’t trying to stop him.

The skills competition is an acquired taste. A lot of people will turn on the television, see guys dribbling around cones, missing layups and passing balls in to empty nets and wonder, “What the f— is this?!”

It’s a gong show. And the NBA has decided to really unleash the full, comical reality of this year’s event by transitioning away from using just point guards. Defending champion Patrick Beverly is in the mix at a tempting +500, as is the diminutive Isaiah Thomas, who leads the market at +300. Shooting guards C.J. McCollum (+450) and Jordan Clarkson (+500) are also here.

After that, the skills competition goes bats hit crazy. DeMarcus Cousins, Draymond Green, Karl-Anthony Towns and Anthony Davis are the other four entrants. We’re going from the 5-foot-9 Thomas to the seven foot tall Towns in this one, folks.

Listen, if the gimmick is to get me to watch the skills competition by featuring big men that I know and love then it’s working. I’m in. At the very least, I want to see DeMarcus Cousins hit a bounce pass or throw the ball in to the stands out of frustration.

As you’d expect, there’s no real rhyme or reason to betting this one. I’m going with Beverly again simply because he’s won this stupid thing before. He’s the captain now and he’ll be the captain again, if you catch my drift.

Two things drive me crazy about this year’s slam dunk competition. The first is that Kenny Smith will probably be running his fat mouth during the whole thing like he’s Flavor Flav. We complain about announcing in sports a lot, but nobody makes me want to vomit with rage more than Kenny Smith during the dunk contest.

The second thing that’s grinding my gears is the absence of Andrew Wiggins, a Toronto-born sensation who isn’t participating this year. And nobody really knows why. Actually, it’s probably the same reason that LeBron never competed. Everything’s been done before and nobody’s ever going to top Vince Carter’s 2000 Slam Dunk Contest masterpiece.

The risk-reward ratio of winning the Slam Dunk contest isn’t appealing for young superstars. If they screw up, they’re never going to hear the end of it and their screw-ups will be immortalized on the Internet for the rest of time.

And yet, a bunch of superstars have competed in and won this event. Blake Griffin dominated this comp in 2011, and John Wall won just two years ago in 2014. This event matters when big names are in it, and nothing would be more serendipitous than Wiggins dunking his way back in to the hearts of fans in Toronto.

Instead we’re being treated to four guys who the casual fan probably hasn’t heard of, which is downright depressing given that one of them is the defending champion in this very event. Zach LaVine joined the likes of Jeremy Evans and Terrence Ross last year as a virtual nobody in the association who just happens to be rewarded for his put-back ability.

LaVine and Ross have stable futures in the league, but nobody really cares about them. It’s not like you’re going to jump for joy if your team trades for either of them. There’s a reason Gerald Green has been on 12 different teams in a career that’s just 11 years long.

A lot of guys can dunk, but what made Vince Carter and Blake Griffin’s demonstrations special was that they were two of the best in the world during their peaks. Evans, Ross and LaVine have averaged 24.2 points combined this entire season. That’s less than a point more than Griffin.

Zach LaVine will give it his best as the favorite to win at -250. In the 2014 renewal of the Slam Dunk contest, LaVine was sensational. But he was also repetitive. Three of his dunks were between the legs and the fourth was around the back. I really don’t know if he has anything left to show us.

Will Barton enters as the second favorite because…I can’t figure out why. Even his highlight reels aren’t that impressive. He lacks the authority and control that made LaVine’s set shine last year. There’s no chance in hell this +400 second favorite makes any sense in all NBA All Star weekend betting picks.

Andre Drummond threw his name in to consideration for some reason as well. After all, what does he care if he does well or not? We already piss on him for not being able to hit free throws. Drummond inevitably falls in the “too tall and not Dwight Howard” category here. It’s just not impressive to see a near-seven footer dunk a basketball. If JaVale McGee couldn’t win while dunking on two baskets at once, I doubt Drummond’s going to do anything special enough to warrant a victory over his opposition.

It might not seem like much of a difference, but the 6-foot-9 Aaron Gordon has a big chance to impress if LaVine doesn’t come with anything more than his barrage of between the legs nonsense. Gordon was incredible during one of the best McDonald’s All American jam sessions (which also featured Wiggins) and he has the power, authority and out worldly athleticism for a man of his size to steal this competition and dazzle people in the process.

The odds makers are hedging against a landslide of fans betting blindly on LaVine here, but the smart money is on Aaron Gordon who is paying back at a +450 clip.

The real main event of All-Star Weekend betting is the three-point contest, which has a star-studded cast here. Former Raptor Chris Bosh brings up the rear at +1500, and won’t care if he bombs out of the building. He’s got two world championships.

James Harden seems like a great bet at +1200, but those are the same odds being given to Khris Middelton. Harden is one of the best scorers in the game, but he’s not a great three-point shooter. He is currently the 64th best three-point shooter by percentage, tying him with DeMarcus Cousins in this category.

The two men to beat are both Golden State Warriors. Klay Thompson enters at +400, while defending champion Steph Curry leads the fray at +115. The biggest threat to either of these stars is J.J. Reddick, who is leading the league in three-point percentage at .478.

Devin Booker represents the Suns as the best underdog play with +700 odds to win the Three-Point Contest, but he’s worth no more than a chip shot. It’s easier to make money off of him than others, but the rookie from Kentucky is a hard sell outside of the value he presents. There’s just no telling how he reacts to an event that has been dominated by veterans.

Hometown favorite Kyle Lowry will certainly earn some nods, but he’s not a great spot up shooter. In-game scoring is Lowry’s strong suit and it won’t get a chance to flash here amongst the racks. He’s worth staying away from at +700 despite the home court advantage in NBA All Star weekend betting.

If you think I’m going to suggest anyone other than Curry, then you’re an idiot. If he’s proven anything this season, it’s that he’s out to prove that he’s the greatest shooter of all time. To do so, he’ll attempt to inch closer to the three-peat Larry Bird had when the Three-Point Contest was first introduced back in 1986.

There is no market in All Star Weekend betting where the favorite is a mortal lock compared to the odds on the Three-Point Contest. Take Curry at +115 and lean hard in to this one. You can do worse than betting against the greatest shooter of our generation in a competition designed for his specific skill set.