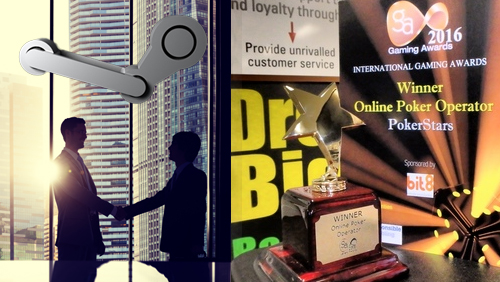 Three PokerStars related stories including victory at the gaming industry Oscars, a deal with Leander Games to showcase Blueprint gaming content, and sister site Full Tilt are finally on Steam.

PokerStars has won the illustrious Online Poker Operator of the Year award at the 9th Annual International Gaming Awards (IGA) at the Savoy Hotel in London.

It was the fourth consecutive year that PokerStars have picked up this particular award at the gaming industry Oscars. It was the only award they were nominated for. Full Tilt also made the shortlist, as did 888Poker, Sky Betting & Gaming, Unibet and WSOP (Caesars).

PokerStars also sponsored two of the awards: the Technology Provider/Supplier award and the iGaming Software Supplier. Amaya Gaming were on the shortlist for the Socially Responsible Operator of the Year Online, but walked home empty handed.

In a press release received from the company: Eric Hollreiser, Vice-President of Corporate Communications for PokerStars & Amaya Gaming, said they were ‘grateful to have earned the award’, and dedicated it to the ‘millions of players and thousands of staff who have contributed to PokerStars’ ongoing success.’

That same press release went on to stipulate three main reasons that they manage to retain the award for the fourth consecutive year. The emergence of Spin & Go games got a mention, the increase in popularity and attendance at online festivals such as World Championship of Online Poker (WCOOP), and the signings of Real Madrid star Cristiano Ronaldo and Barcelona front man Neymar Jr.

Leander Games signed up with PokerStars & Full Tilt in January 2014. The new games, featuring Wish Upon a Jackpot and Winstar, will be distributed via the LeGa remote gaming server (RGS).

Blueprint Gaming is a subsidiary of the German gaming giant Gauselmann. Bet365, Betfair and William Hill also use their products.

You may remember PokerStars sister site got the thumbs up from the Steam gaming community in Nov, 2015 after going through the Steam Greenlight process.

Yesterday, a Full Tilt representative announced via e-mail that the process has now been finalized and the free-to-play version of the game is now available to 125 million gamers via Steam.