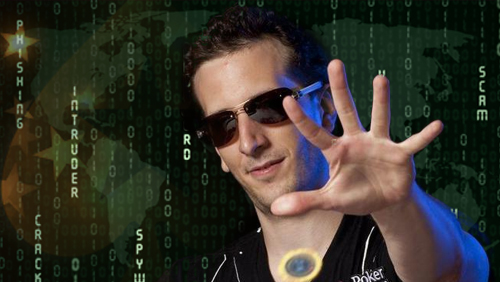 Three barrels of pure value including PokerStars 100 Million customer celebrations, investigations determine that Turbo Championship of Online Poker heads-up player was no bot; and Bertrand ‘ElkY’ Grospellier is the king of social media.

Who was the first person ever to open up an online poker account at PokerStars?

The question has come up recently as the world’s largest online poker room rolled out communications in line with their promotion celebrating 100 million customers.

The site’s Editor-in-Chief, Simon Young, gave it justice, and although he didn’t confirm who the first person was, he did paint a pretty picture of the site’s longest serving player.

Sweden’s Frank Öberg, 34, was one of the first men ever to join PokerStars, and given the fact that he still plays on the site, he has now been credited with the title of Longest Serving Player.

Öberg, who was a big Spice Girls fan, plays under the pseudonym “SpicyF”. He still has his original avatar. Amazingly, Öberg was the winner of the PokerStars 20 Millionth Hand Promotion in 2002. He won $500. Öberg joined in Sep, 2001. He started playing $1/$2 Limit Hold’em, and believes he played in the site’s first $100/$200 Limit Hold’em game where PokerStars Lee Jones acted as pizza delivery boy.

Öberg plays sparingly on the site these days.

SuperNova Elite (SNE) and SuperNova (SN) players are about to find out what PokerStars is doing with their money.

The promotion starts Feb 1 and runs up until that time you should be buying your sweetheart roses.

Players will be selected at random to compete in some milestone challenges. The top prize on offer is $100,000.

ElkY is King of Social Media

In July 2014, PokerStars teamed up with social media guru’s Followerwonk to see who controlled the Social Media airwaves in poker. Social media channels: Twitter, Facebook and Instagram were used to score the poker players, and Daniel Negreanu was the top-ranked player with a social media score of 78.

PokerStars has had a fresh look at the scores; added scores for Twitch and Negreanu has passed the crown onto someone else.

Either way, French star, Bertrand “ElkY” Grospellier is the new king of social media with a score of 79. He was rated ninth in 2014. Since then he has added 13,600 Twitter followers and 26,800 likes on his Facebook page.

Negreanu has dropped down to third. Fellow Team PokerStars Pro, Liv Boeree, rises to second. Vanessa Selbst moves into the top ten for the first time (11th – 4th), and Jason Somerville (5th) and Fatima Moreira de Melo (6th) are the newest additions to the Top 10.

IvanHaldi is Not a Bot

PokerStars has released a statement stating that they are confident PokerStars player “IvanHaldi” is not a bot.

Luckbox immediately typed “I Agree” into the chat box, but the Russian player went all silent for the next 60-minutes plus, at which point the game recommenced and Luckbox won the $48,042 first prize outright.

I am sure there are 100% methods of identifying exactly who the Russian is, but in the meantime, Michael Josem released a statement on the 2+2 thread giving five reasons why Stars believe “IvanHaldi” is human.

a) Scanning for prohibited third party software running in conjunction with the PokerStars client.

b) Collecting detailed information of how each player interacts with the PokerStars client on a fundamental technical level. This includes, but is not limited to:
– the manner in which hardware and third party software is used to input actions
– the usage of various client features
– chat at the tables (or lack thereof)

e) Conducting real-time Turing tests during play, such as CAPTCHAs which prompt players to type in a random word, and other proprietary tests which are designed to be imperceptible to humans.

PokerStars didn’t relay a reason as to where “IvanHaldi” was during those 60-minutes. Let’s hope the investigation ends when they have that reason and everyone is duly notified.