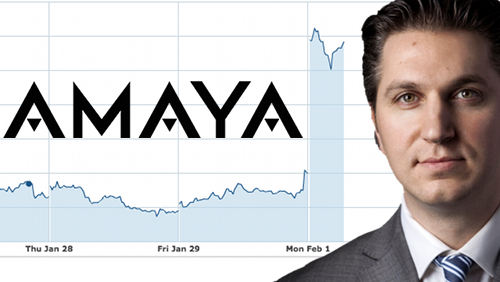 Shares in Canada’s Amaya Gaming are up one-quarter on Monday after CEO David Baazov tabled a C$2.8b offer to take the company private.

On Monday, PokerStars parent company Amaya issued a statement saying Baazov (pictured) and undisclosed partner investors were planning an all-cash $C21 per share offer to acquire the company and delist its shares.

Baazov, who currently owns 18.6% of Amaya shares, is offering a 40% premium to the company’s closing price on Jan. 29. The company stressed that there was no guarantee that Baazov would follow through on his pitch with a concrete offer.

Amaya’s stock soared after its 2014 acquisition of the Rational Group, whose assets included Stars and Full Tilt. The shares peaked at $37.28 in Feb. 2015 but had fallen to less than $15 as of last week after the company revised its earnings forecast in November.

Amaya has been hit with a series of setbacks, including the slower than expected rollout of state-level iGaming legislation in the United States, suggestions that the online poker market has peaked, delays in diversifying PokerStars into sports betting and a massive $870m civil judgment in Kentucky (although the latter is based on sketchy legal turf and thus more negative in terms of perception).

With significant US expansion unlikely for the foreseeable future and past predictions of Russia legalizing poker showing little tangible progress, Baazov’s bid to take the company private – a strategy this site has routinely stated is optimal for all online gambling companies – would be a way to eliminate the need to deal with nervous nelly investors who expect an uninterrupted upward growth trajectory.

Baazov, who as recently as a few months ago was still talking about issuing several billions of dollars worth of new shares, likely sees value in waiting until investors demonstrate an actual appetite before he throws more chum into the water. The company’s current institutional investors will likely be only too happy to cash out.

There’s a chance that Baazov’s bid could encourage rival bidders to emerge, although the rollercoaster ride Amaya has been on these past two years could dissuade less gaming-committed types from getting too close. But there is the chance that Baazov’s gambit could leave him walking away with a handsome payday but no control.

There’s also the possibility that Baazov and his backers could end up like the hedge funds that loaded up on debt to take casino operator Caesars Entertainment private. That deal was done immediately prior to the 2008 global recession, an unfortunate bit of timing that the company is still wrestling with today. Market bears worried about China’s true economic state have been predicting a new global downturn could be just around the corner.

Still, not everyone is convinced Baazov’s bid is serious, with some skeptics suggesting that the announcement was more intended to give the stock a nudge while Baazov waits for some actual good news with which to tame investors’ pessimism. Watch this space…